Suresh Raina feels India will get their mojo back in the upcoming Twenty20 World Cup in Sri Lanka with the return of Yuvraj Singh and Harbhajan Singh, two vital cogs in the ODI Cup triumph last year. 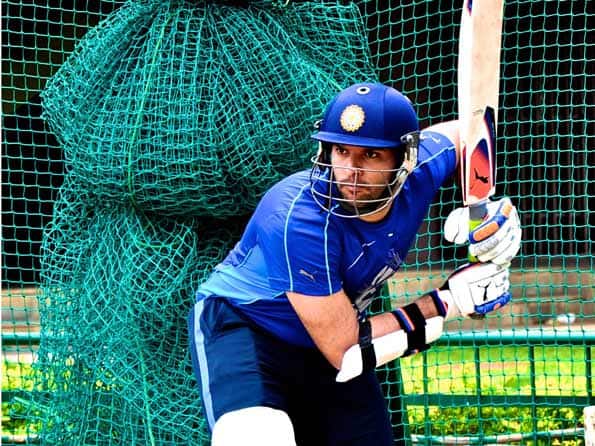 Suresh Raina feels India will get their mojo back in the upcoming Twenty20 World Cup in Sri Lanka with the return of Yuvraj Singh and Harbhajan Singh, two vital cogs in the ODI Cup triumph last year.

“It’s almost the same team that won the World Cup 2011. Also we have a lot players who were a part of World T20 triumph in 2007. So the team is upbeat and in a positive frame of mind ahead of the World T20,” Raina told PTI in an interview.

Having done it twice for India by helping the team win the inaugural World Twenty20 in 2007 and the ODI World Cup last year, Yuvraj has ensured that the mood is upbeat with less than a fortnight to go for the tournament in Sri Lanka.

Raina said the team was looking forward to the return of India’s World Cup hero Yuvraj who will make a comeback after successfully battling cancer.

“Yuvi bhai is such a great fighter. He has put in so much effort, worked really hard at the NCA. You will get to see this when he comes out to on the field. He is a teamman. There is so much to learn from him. I really wish him best of luck in his comeback. We are pretty confident that he will do well,” he said.

“(Harbhajan Singh) Bhajji-bhai is also returning. He is one of the key players in the line-up. We have a lot of allrounders who can chip in with two three overs.”

Raina feels India does have a combination that can create magic.

“Our fielding is very agile. We also have good youngsters in Manoj Tiwary, Ashok Dinda. Our side looks really balanced,” he pointed out.

The defending champions of the inaugural edition in 2007, India had a fine outing in Sri Lanka in July-August when they thrashed the hosts 4-1 in the ODIs and 1-0 in a one-off T20I.

Raina played the role of a finisher as he aggregated 174 with a fine 58.00 average in the five-match ODI series.

“I had a fine outing in that series. We won series convincingly. I’m looking forward towards doing well again there,” Raina said.

“We are coming back after two good series against Sri Lanka (in Sri Lanka) and New Zealand. It was nice to win the both the series handsomely. Now everything is in order for the World T20. Against New Zealand, we are confident and it will give us a perfect build up before we leave for Sri Lanka,” Raina said.

India will take on New Zealand in two T20Is before flying to Sri Lanka where they will warm-up against the hosts (September 15) and bitter rivals Pakistan (Sep 17).

Raina feels that these four games will give India the perfect momentum before squaring up against Afghanistan in tournament opener (September 19).

“These two matches (against the Kiwis) and two warm-up games in Sri Lanka should be enough to get an idea… We will get to know how the team is shaping up,” the left-hander said.

Pakistan and Sri Lanka would be two tough opponents in the World T20, Raina said.

“West Indies also have a fine T20 side but Sri Lanka and Pakistan are stronger contenders due to familiarity with sub-continental conditions. But anything can happen in T20.”

Raina was recalled into the just-concluded Test series versus the Kiwis after a poor outing in the England series.

The youngster had one half-century in the series, having involved in a crucial 99-run partnership with Virat Kohli in the second Test.

Yet to establish himself in the Test mould, Raina however hoped to return stronger when England series starts later this year.

“I’m counting on the positives. I had a fine partnership with Virat. I gave my best, but I was unlucky a couple of times. Hopefully, I will be able to rectify those mistakes before the England tour.”

But for the time being, Raina’s focus is on the shortest format of the game, something the 25-year-old seems to relish more.

“Twenty20 is a totally different format. We have a packed T20 calendar as there will be Champions League T20 (in South Africa) after the World Cup. I’m really looking forward towards doing well there,” he concluded.