Karn Sharma bowled the 12th over for Sunrisers Hyderabad against the Royal Challengers Bangalore in their Indian Premier League (IPL) 2014 match at Hyderabad. Virat Kohli greeted him with a big six down the ground off the first ball. He followed it up with another boundary. Kohli hit the fifth ball of the over for the 500th six of the tournament. The over cost SRH 19 runs.

The 11th over of the innings was bowled by Parvez Rasool. He started with a dot ball. The next ball was outside the leg stump and Yuvraj swept him for four. The third ball was another single. Virat got another single off the fourth delivery. Yuvraj hit a six off the fifth ball, but it was nearly caught by Steyn. The final ball was just a single.

Irfan came on after the strategic timeout and started off well, going for only a single off the first four balls to Yuvraj. Even Kohli couldn’t capitalize as the fifth ball was another dot. Irfan bowled a slower ball off the final delivery, and Virat managed to hit it through covers for four.

Earlier, Royal Challengers Bangalore batsmen lost their way, while playing Sunrisers Hyderabad in Indian Premier League (IPL) 2014. Both Parthiv Patel and Chris Gayle were out early in the piece. Both batsmen struggled a bit for timing and placement. Virat Kohli came into bat at No 3 position. But even he couldn t get going.

It is perhaps left to Yuvraj Singh to come good for them. Maybe luck is on his side today as one of the shots he played over mid-wicket wasn t well connected but it dropped right in the front of the fielder. He though followed it up with a fine boundary off the same bowler, Karn Sharma. However, they need more such boundaries in this crucial game in IPL 7. Unfortunately for Hyderabad, Dale Steyn seemed to have hurt his shoulder at the boundary line.

Earlier, It was Dale Steyn who bowled the second over for Bangalore. The pacer swung the ball away from Gayle. Virat Kohli came into bat at No 3 position. Once they lost Parthiv, Bangalore batsmen tended to be cautious at the crease. Bhuvneshwar swung the ball into right-handed Kohli and struggled to find his length right.

Earlier, in the 46th match of the Indian Premier League (IPL) 7 between Royal Challengers Bangalore (RCB) and Sunrisers Hyderabad (SRH), Virat Kohli won the toss and elected to bat first. RCB went in with the same squad. On the other hand, SRH made two changes. Amit Mishra and KL Rahul were replaced by Pervez Rasool and Venugopal Rao. 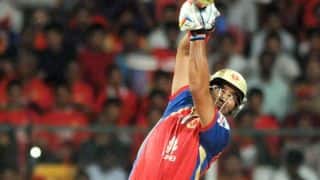 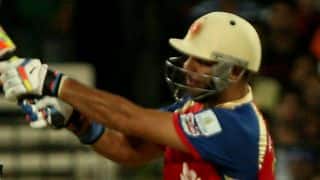