Yuvraj Singh: Can't wait to get on the field

Yuvraj Singh: Can't wait to get on the field

Swashbuckling batsman Yuvraj Singh, who is staging a comeback into international cricket on Saturday after recovering from a rare germ cell cancer, said that he is counting the hours daily on his impending return which he described as a 'huge moment' in his life. 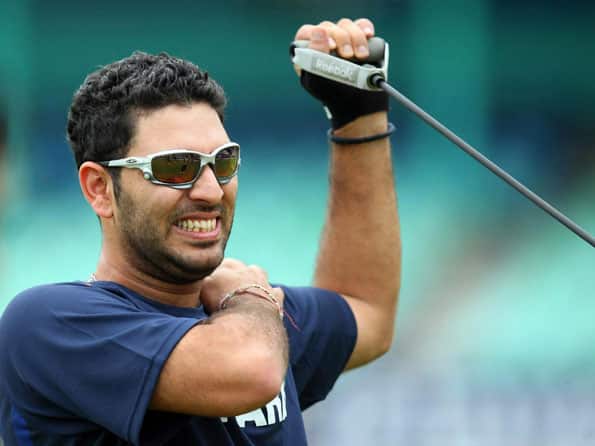 Swashbuckling batsman Yuvraj Singh, who is staging a comeback into international cricket on Saturday after recovering from a rare germ cell cancer, said that he is counting the hours daily on his impending return which he described as a “huge moment” in his life.

Within months of his recovery from his serious illness, Yuvraj was included in the Indian cricket team for the World Twenty 20 Championship in Sri Lanka as well as the two T20s against New Zealand at Vishakapatnam on September 8 and Chennai on September 11.

“As it is this environment that I am used to. That is something that I have been doing since the age of 15 to 17…

“Since I was a kid. So when that was taken back from me I was shocked. It is like when a child gets his first Christmas gift and how he is waiting to open it, what is in store…it is like that,” the man of the tournament in the 2011 World Cup stated.

However, Yuvraj was non-committal on how well he would perform in his comeback match.

“I don’t know how I will play. I don’t know if I would be making one run or 20 runs, take catch…take wicket.

Whenever I climbed four steps I used to get breathless. When I was like this I felt it is not going to be possible. It was tough. But I worked very hard. I practiced hard at National Cricket Academy,” he said.

“For me, it is an achievement that I am back on field.

I don’t know how I am going to play on 8th. All I know is that to get on the field is a huge achievement for me. I feel very proud of my self. I am thankful to my family, friend and people of India for showering so much love on me. With all these emotions I will go on the field,” he added.

The left-hander underwent treatment in the United States in January this year, involving three sessions of chemotherapy, and returned to India in April, after successfully battling cancer.

When Yuvraj was diagnosed with cancer, cricket was the only motivating factor for him.

“Motive was to save my life. Cricket is my life. When I was battling cancer, I thought if came out of this, I would definitely play for India. And that kept motivating me. I used to watch matches where India was playing. I also used to get frustration,” he said.

“But one day, Anil Kumble came and he said I must stop watching all these things and improve my health, try and get better. People’s influence was important to me,” he added.(PTI)

Jonathan Trott ruled out of remainder of English domestic season

Pakistan win toss, elect to bowl against Australia in the first T20 match at Dubai