Yuvraj Singh smashed 38 to steer India to 93 for the loss of three wickets against England in their first Twenty20 match in Pune. 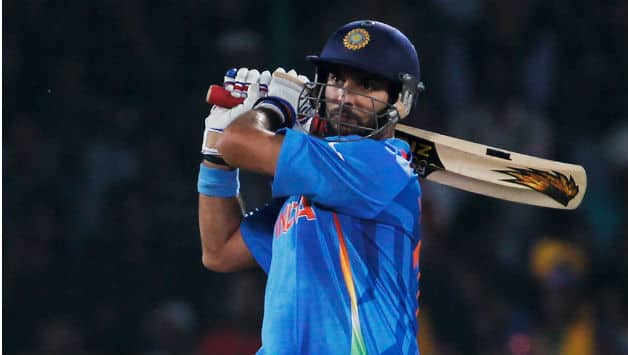 Yuvraj Singh smashed 38 to steer India to 93 for the loss of three wickets against England in their first Twenty20 match in Pune.

Openers Gautam Gambhir (16) and Ajinkya Rahane (19) gave India a steady start. However, both were dismissed in the same over by Tim Bresnan.

Yuvraj had brilliant figures of three for 19 from his quota of four overs as England could manage only 68 runs in the back 10 after scoring 89 from the first 10 overs.

England made a blazing start with opener Alex Hales, making a whirlwind 56 in 35 balls with 7 fours and 2 sixes.

Hales waded into the Indian new ball bowlers Ashok Dinda and Parvinder Awana with great gusto before Yuvraj applied the brakes with a haul of three wickets in a space of 10 deliveries after the visitors were put in to bat by the hosts.

Coming on to bowl when England had raced to 76 for 1 in 8 overs, Yuvraj made a big impact as he packed off one down batsman Luke Wright (34 in 21 balls with 3 fours and a six), Hales and rival captain Eoin Morgan (5) in quick succession to after Ravichandran Ashwin had captured the wicket of the other opener Michael Lumb in his second over.

Hales and Wright put on 68 runs for the second wicket before both departed and the England innings stuttered a bit before Jos Butler gave it the final impetus with a quick-fire unbeaten 33 in 21 balls with three sixes.