Delhi Daredevils now have the momentum going into the remainder of IPL 2015.

Mayank Agarwal and Yuvraj Singh ensured that Delhi Daredevils (DD) beat Kings XI Punjab (KXIP) by five wickets and in the process secured their first win of Indian Premier League (IPL) 2015. Due to this win DD now have two points from three games, even KXIP have two points from three games, with both teams securing one win apiece.  In pursuit of 166, DD lost an early wicket in the form of Shreyas Iyer for just six in the third over of the innings off the bowling of Sandeep Sharma, who came into the match with good form. Skipper JP Duminy was at the crease early and was determined to make sure that he set a good platform for the other middle-order batsmen to exploit. Mayank Agarwal too looked in good nick. Full update: KXIP vs DD IPL 2015 Match 10

Duminy built a decent partnership for the second wicket but he was unfortunately run out at the non-striker’s end after Agarwal hit the ball firmly back, and Akshar Patel dove to his right, when the balltook a deflection off his hand and hit the wicket. Duminy, who was backing up, failed to reach the crease on time, as a result his innings abruptly came to an end at 21. Full Scorecard: KXIP vs DD IPL 2015 Match 10

IPL 2015’s most expensive player Yuvraj Singh then walked in and he got into the groove immediately. Meanwhile, Agarwal reached his half-century after he was dropped in  the deep off the bowling of Mitchell Johnson. Yuvraj Singh also got to his half-century off just 33 deliveries after he smashed Rishi Dhawan over the mid wicket fence. Agarwal and Yuvraj brought up their 100-run stand in the process in quick time. Yuvraj then was dismissed for 55 off 39 deliveries, but he had done the damage by then. Agarwal was dismissed in the very next delivery for a 48-ball 68 , which brought two new batsmen at the crease. But DD never looked in trouble from there. Virender Sehwag reaches 4,000 T20 runs during KXIP vs DD IPL 2015 match at Pune

In the end, it was a comfortable victory and DD will be delighted to have gotten over the line. DD can now move on to the the next games in the tournament with a certain amount of confidence.

Earlier KXIP had set DD a stiff target of 166.  KXIP got off to a decent start, courtesy of some sensible batting from openers Murali Vijay and Virender Sehwag played sensible cricket. Vijay was the first to go for 19 off 18 deliveries as he top edged a ball in the air, which fell into the grateful hands of Duminy off the bowling of Angelo Mathews. Meanwhile, Sehwag became the seventh Indian player to teach 4,000 T20 runs.

The fall of the wicket brought Wriddhiman Saha at No.3 and he too looked in an aggressive mood and he raced to a quick-fire 29-ball 39, before he was cleaned up by Amit Mishra. This was an important wicket for DD as the partnership was looking extremely threatening.  Sehwag went about his business and managed to reach 47 off 41 deliveries before he played an aggressive shot and holed out to Coulter-Nile at deep cover of skipper JP Duminy’s bowling.

As far as the DD bowlers are concerned, Australian fast bowler Nathan Coulter-Nile bowled extremely well in the beginning. Imran Tahir went for 18 in his first over and was immediately taken out of the attack. The partnership between David Miller and Glenn Maxwell was going to be crucial but it came to an abrupt end when Maxwell hit one straight down the throat of Manoj Tiwary off the bowling of Tahir, after he conceded two sixes of that over. Duminy struck again to get rid of the dangerous Miller for five.

Skipper George Bailey now was entrusted with the responsibility of getting KXIP to a good position, but there wasn’t much batting left. Akshar Patel has the capability to hang around a bit but after he struck a huge six of Mishra, he managed to rotate the strike and kept giving strike back to Bailey. Eventually, KXIP will feel they have just about par score and will know they have to do well with the ball to win the match against a formidable DD batting unit. Tahir bowled an excellent last over, which included two wickets off the last two deliveries to give DD the momentum going into the break.

Man of the match: Mayank Agarwal 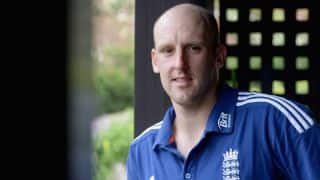