Indian cricketer Yuvraj Singh, who underwent three cycles of chemotherapy in United States for a rare germ cell cancer between his lungs, returned to the country on Monday to a rousing reception from adoring fans. 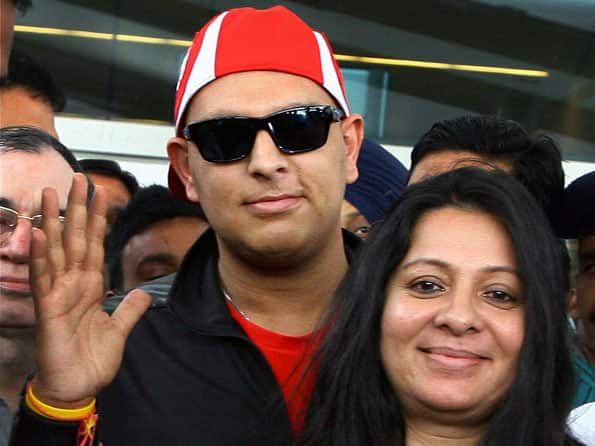 Indian cricketer Yuvraj Singh, who underwent three cycles of chemotherapy in United States for a rare germ cell cancer between his lungs, returned to the country on Monday to a rousing reception from adoring fans.

Received by his mother Shabnam at the Indira Gandhi International Airport here, Yuvraj came on a British Airways flight Monday morning after spending some days in London to recuperate from the after-effects of the chemotherapy.

His head, which went bald during the treatment, was covered by a red sports cap. Wearing a red T-shirt teamed with Khaki pants, Yuvraj made his way through hordes of fans and waiting media personnel after coming out from back gate of the airport.

Flashing a victory sign and a smile, the 30-year-old walked through patiently towards a white Audi SUV, which drove him to his home in North Indian city of Gurgaon from the airport.

“It (the cancer) is completely out of his system and he is better now,” a friend who was with him London during the treatment said.

The Man of the Tournament from last year’s World Cup, which India won after 28 years, had gone to the United States for treatment in January.

“finally the day has come ! i am going home tomorrow ! cant wait , excited to see my friends and family ..see you india!! mera bharat mahan!” Yuvraj had tweeted Sunday.

It was an emotional homecoming for the cricketer with fans crowding the airport exit, besides the expected media frenzy.

Some fans had come all the way from Punjab to welcome the aggressive batsman, who was given an inspirational message by cycling legend and cancer survivor Lance Armstrong during the treatment.

After reaching his home in Gurgaon, Yuvraj’s mother Shabnam spoke briefly to waiting reporters but the man of the moment restricted himself to just waving at the fans from the balcony.

“I am very very happy that he is back. It was an innings that he fought alone but with the blessings of the country. He is absolutely fine. It feels like India has won the World Cup again,” a beaming Shabnam Singh told reporters.

“I think that the entire nation has been so good and he is so grateful that everyone is there. He does not have to see any doctor before another three months. For now, he will just rest,” she said.

“I will cook him some aaloo paranthas and he will be taking rest for another 10-15 days before scheduling anything. He is very positive about the whole thing,” she added.

In a 19-second video on Twitter, Armstrong had urged Yuvraj to keep moving forward optimistically.

“Hi Yuvi, I am Lance Armstrong and welcome home. Man you have got one big following, I have heard about you every hour of every day since you have been diagnosed. We are pulling for you, so glad you are healthy now. Have a great life, don’t look back, live strong buddy,” the 40-year-old American had said.

The left-handed batsman, who was met by fellow cricketers such as Anil Kumble and Sachin Tendulkar during the course of his treatment, is not expected to play for a few more months.

Yuvraj will announce his future plans and details about treatment that he underwent in a press conference on Wednesday.

He missed the entire Australian tour and also the ongoing the Indian Premier League season 5 due to his ailment.