Yuvraj Singh, who has recovered from an ankle injury, is likely to play his first IPL match of the season 9 when Sunrisers Hyderabad takes on Gujarat Lions.

Hyderabad: Star cricketer Yuvraj Singh, who has recovered from an ankle injury, is likely to play his first IPL match of the season 9 when Sunrisers Hyderabad takes on Gujarat Lions. “He (Yuvraj) is available. When we finalise our XI, he is very much in our thoughts,” SRH Head coach Tom Moody said in the pre-match press conference. “Yuvraj Singh is a seasoned all-rounder, who brings experience to the team and can make useful contribution to the team both with bat and ball.” Moody said the Sunrisers would focus on putting up a competitive performance rather than thinking too much about the performance of rival teams. Live Cricket Scorecard: Sunrisers Hyderabad vs Gujarat Lions, IPL 2016 Match 34 at Hyderabad

“We watched all those matches. Everyone gets caught up wanting to see how other teams are performing, how other individuals are performing. But, at the end of the day, there is no point of striving about what other teams are doing on the table,” he said. “It’s important what we do. We got good run of games now. We got good rest. The guys are fresh and up. It’s fairly now in our hands how we play the second half of this competition. SRH would be well prepared as it faces GL, who are also at the top of the table, and home side takes confidence that it won in the previous match between the two,” he added.

Describing SRH’s latest bowling sensation from Bangladesh Mustafizur Rahman as a wonderful guy, Moody said the language barrier in communicating with him is not a problem. “He is a wonderful guy. He has fitted into the group very well. He is a good character. He has good personality. He is a funny guy. To be fair, I think there has been a beat up about the fact that there is a language barrier. He is not fluent in English. At the end of day, we manage to communicate what needs to be communicated. Cricket is a pretty universal language,” he said. 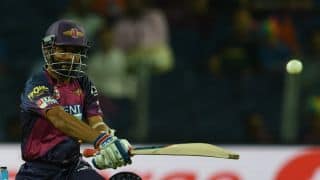