The RCB owner became the butt of jokes on the social media platform after Yuvraj's flop show.

Yuvraj Singh‘s dismal outing with the bat against Sri Lanka in the final of the ICC World T20 2014 at the Sher-e-Bangla national stadium evoked anger and fury across the social media. People started ranting him on Twitter, and ultimately the beans spilled further to the court of the ‘King of the Good Times’, Vijay Mallya. The business baron became the butt of jokes on Twitter as he bought the services of Yuvraj for his Indian Premier League (IPL) franchise, Royal Challengers Bangalore (RCB) for the 2014 edition.

Yuvraj Singh‘s struggle in the centre to get the runs coming, and scoring at a healthy strike rate caught the ire of the Twitter world. Yuvraj consumed 21 deliveries to score just 11 runs, and that too coming in a situation when India desperately needed some quick runs.

The likes of Lasith Malinga and Nuwan Kulasekara completely strangled him with yorkers and slower ones which he continuously failed to read. Yuvraj’s struggle also ensured that the in-form man, Virat Kohli faced just seven deliveries in the last four overs of the innings.

When was the last time Vijay Mallya invested on a performíng asset. #yuvi

Vijay Mallya should have given those 14Cr to the workers of Kingfisher Airlines. #INDvsSL

Of all the Indian citizens, Vijay mallya must be the most worried man right now. 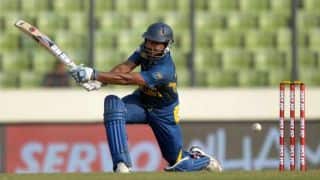