India captain Mahendra Singh Dhoni is not only delighted with the return of Yuvraj Singh, but also with the fact that he will have another senior cricketer to guide the youngsters. 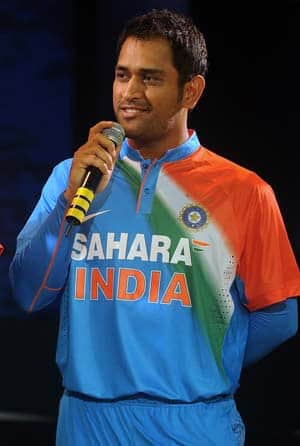 India captain Mahendra Singh Dhoni is not only delighted with the return of Yuvraj Singh, but also with the fact that he will have another senior cricketer to guide the youngsters.

During the launch of India s new jersey for the Twenty20 format, Dhoni expressed his happiness over Yuvraj s comeback in the national side.

“He s not only an important player but also an important character in the team. Without him the dressing-room is a bit boring,” he said.

“Virat was trying his best to keep things light and ensure that the newcomers settled in quickly. Now we ll have a healthy competition between Virat and Yuvi, to see who is the best at ragging,” the Indian captain was quoted as saying by BCCI s official website.

Dhoni said the break which the Indian team got after the fifth edition of the Indian Premier League has helped them many folds to gear up for a crucial season.

“We had nearly a month and a half off and even when we played in Sri Lanka recently we had enough gaps between matches,” said Dhoni.

“The time off has given us a chance to be mentally and physically fit. If you look ahead at the packed schedule you will feel there is a lot of cricket ahead. The better thing is to take it a bit more short term and look at what you need to do in the next 15 days,” he added.

Yuvraj, who has recovered from a rare germ cell cancer, said he had trained hard at the NCA in Bangalore for the last two months and was feeling good but a bit nervous too after the long break from cricket.

“I am feeling good. I have worked hard for the last two months. I am nervous. I never thought I will get another chance (to play for India). I feel as if it is the first game for me,” said Yuvraj who has been chosen in the Indian team for the series against New Zealand and the World T20.

Talking about the new T20 jersey, Dhoni remarked in a lighter vein that he did not know whether the research that has gone into it would translate into extra runs for the team.

“Lots of research has gone into it. I don’t know whether the research will result in extra runs but we will definitely feel more comfortable.

“This is a very good start. When people are swapping channels they see white and immediately know it is Test cricket and blue with One Day cricket. Now that we have a T20 shirt there will be a strong association between the format and the T-shirt,” said the captain.

Key features of the uniform include the new collar, a dash of tricolour near the left shoulder and three stars above the BCCI’s logo signifying the three World Cup victories.