Yuzvendra Chahal, who has excelled in limited overs cricket, must focus on playing more red-ball cricket to gain experience in the longer format, says Rahul Dravid.

The former India captain said the Chahal has the skills and has been given the chance to prove himself in the ongoing series against South Africa A.

“Chahal is someone the Indian selectors are keen on and they want to see how he does in red-ball cricket because he has not played much. So, it is nice that we gave him a couple of chances and it has worked out nicely. So, the more Chahal plays red-ball cricket, the more experience he will gain. There is no doubt, as we see, that he had got skills, but he needs to play a lot more,” Dravid said.

Chahal has had a lot of success with white ball when he toured for India A in Australia, Dravid said after India A beat South Africa A by an innings and 30 runs.

The legendary batsman is also pleased with the development of players such as Mayank Agarwal and Prithvi Shaw. “I think they have shown over the last year or so with their performances that they are playing very good cricket. It’s nice to see them developing and growing as players. Whether there is an opportunity or not is not for me to decide. But they have played really well. Mayank Agarwal was quite exceptional in this game and Prithvi has shown continuous improvement in every level he has played,” he told reporters at the post-match session.

Praising Mohammad Siraj, who bagged ten wickets against South Africa A and helped India A clinch the first unofficial Test, Dravid said he has been terrific.

“For someone, who has not even played a lot of junior cricket coming up. He has not been really a part of the system. He has played 17 or 18 first class games. So, he is learning.”

Dravid said he would not judge him quickly and won’t be harsh on him because he has not played much cricket and is in a learning curve.

“He has played a little bit of IPL and has been in and out. He has not had that much opportunities. The more he plays, the better he will get. I think, this is great and good step,” he said.

Also, the organisers are trying to create suitable conditions for fast bowlers so that they get to develop their skills.

“We are trying to create conditions – have more grass on the wicket so that it is bit more challenging for our batsmen while our seamers come into play. This hones their skills and gives them a chance to develop their skills,” Dravid said.

On planning and scheduling A series, Dravid said it is a very critical part, which requires to be done in advance in reciprocating way between various boards just to create opportunities for players.

“I see this A series a good bridge between domestic cricket, national and international cricket. It gives boards chance to give exposure to players. So, we work on planning and scheduling to make this happen. It opens up more options for selectors,” he said.

On the high success rate of Under-19 and India A, Dravid said organising A series is “not only about winning games”, but to supplement talents to the national team.

“Our role is to develop young talents and give opportunities to them. Another role we play is to see what are the requirements of the national team and how we can supplant them,” he said.

“Whether it is Murali Vijay or Ajinkya Rahane or Yuzuvendra Chahal, we try to see who can fit the bill of the national selectors.”

There are times when he has to give opportunities to Indian players who are looking for a recall, he added.

From his perspective, Dravid said they organise A series so that the players get more opportunities to play against quality Australian and South African players.

“We have organised a triangluar series – there will be 30 players on display when we play one day series and Test matches in Australia and South Africa. So, more of our guys get opportunities to showcase their talents against some of the really talented players of the world, the better,” he said. 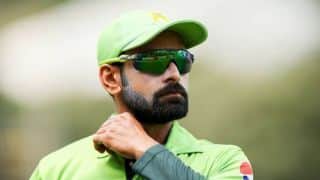