Yuzvendra Chahal has said that the defeats in the limited-overs series against Australia at home isn't a cause for concern.

Yuzvendra Chahal has said that the defeats in the limited-overs series against Australia at home isn’t a cause for concern as India will only come out stronger at the ICC World Cup 2019.

The performance of the spin duo of Chahal and Kuldeep Yadav wasn’t up to the mark as both went for plenty. Yuzvendra was especially expensive after a decent start to the tour. In the first T20I, he took 1/28 but was expensive in the second, played at the M Chinnaswamy Stadium in Bengaluru, with figures of 0/47.

In the lone ODI he played in the five-match series, he leaked 80 for a wicket in 10 overs as Australia chased down a record 359.

But Chahal has put a positive spin to the show saying it will help them to prepare better. “I don’t think we need to change anything. Even they are here to play cricket, we are not playing gully cricket. They read us pretty well. It’s a good sign, so we can prepare ourselves more,” Chahal said on Tuesday.

Talking about his own performance in the second T20I, Chahal said, “There is some pressure when you play for the Indian team. In that match there was some dew and (Glenn) Maxwell batted very well. I learnt how to bowl in dew from that match.”

Chahal represents Royal Challengers Bangalore in the Indian Premier League which gets underway from March 23. However, he rejects the notion that keeping certain tricks under the wraps would be of no use against the batsmen who he will could potentially encounter in England at the World Cup.

“Everyone has your videos. If you’re trying some new variation then you don’t want to show it to everyone, but my variations, there’s not much difference you can find everything on YouTube. The more I bowl to batsmen, big hitters, I get an idea as to where I shouldn’t bowl to them. If they are getting a look at me, I’m also getting a look at them. I’ll bowl to them and learn,” the 28-year-old said. 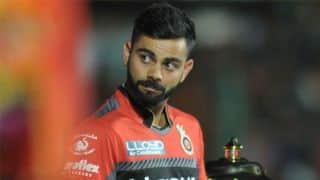