Indian spearhead Zaheer Khan missing from action due to hamstring strain could have cataclysmic bearing on India's chances not only in the historic first Test but also for the rest of the summer. 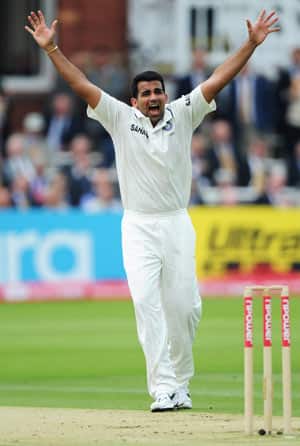 Indian spearhead Zaheer Khan missing from action due to hamstring strain could have cataclysmic bearing on India’s chances not only in the historic first Test but also for the rest of the summer.

England, struggling to come to grips with Zaheer’s befuddling seam and swing on the first day, prospered in his absence and Jonathan Trott and Kevin Pietersen put on 98 runs for the third wicket.

Zaheer clearly didn’t have the perfect conditioning ahead of the England tour after missing out of the entire trip to the Caribbean with a right ankle injury.

He is short of match practice in the longer version of the game, having bowled just 20 overs since the last time he bowled in a Test was in South Africa this January. He had an opportunity to stretch himself in the game against Somerset, the warm-up to the Test series, but didn’t bowl at all in the second innings.

Zaheer, at 32, isn’t getting any younger but his absence at a critical stage of the series, when India’s number one Test ranking is on the line, is likely to further fuel the Club vs Country debate.

Zaheer turned out for Royal Challengers Bangalore in the Indian Premier League (IPL) after leading India’s charge in the Test series against South Africa as well as during India’s successful campaign in the 2011 World Cup.

Zaheer was excellent on the first day of the Lord’s Test, bowling seven overs for just nine runs and taking Alistair Cook’s wicket in the pre-lunch session.

Dhoni impresses with his seam bowling on second day