India suffered a twin blow ahead of their Test series against the West Indies later this month with speedsters Zaheer Khan and S Sreesanth being ruled out of the squad due to injuries. 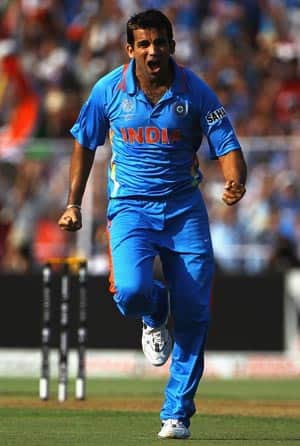 India suffered a twin blow ahead of their Test series against the West Indies later this month with speedsters Zaheer Khan and S Sreesanth being ruled out of the squad due to injuries.

Zaheer and Sreesanth were named in the 16-member Indian squad for the Test series starting June 20 in Kingston but will now not be able to travel to the Caribbean as they need time for rehabilitation.

Zaheer has a right ankle problem while Sreesanth is suffering from an elbow injury on his bowling hand. Abhimanyu Mithun and Praveen Kumar have been named in place of the injured duo for the three-match series that ends on July 10.

“Zaheer Khan and S Sreesanth have been ruled out of the forthcoming Test series against the West Indies. Zaheer has a right ankle problem, and Sreesanth has a right elbow problem.

Both players will require some time off for rehabilitation,” a media release from the Indian Cricket Board said.

The BCCI, however, did not mention the time the duo will need to recover from their injuries. After the West Indies series, India will embark on a full tour of England next month with a four-match Test series starting on July 21.

The ruling out of Zaheer and Sreesanth for West Indies tour will further weaken the squad as Virender Sehwag, Gautam Gambhir and Yuvraj Singh had already been left out due to injuries, while Sachin Tendulkar has opted out of the series.

Zaheer was rested from the ongoing five-match ODI series against the West Indies while Sreesanth was not picked. Both played in the IPL after the gruelling World Cup.

Injury to the two speedsters could once again ignite the club versus country debate as the likes of Sehwag and Gambhir played in the IPL despite injuries.

Zaheer’s long-standing trysts with injuries have caused the seamer to regularly miss matches.

While a shoulder injury made him miss India’s tour of Sri Lanka last year, he was forced to sit out of Tests against New Zealand and South Africa due to groin and hamstring strains prior to the World Cup.

Zaheer, who played for Royal Challengers Bangalore in the IPL often looked jaded and was a far cry from the bowler he was during the World Cup in which he finished with a record equalling 21 wickets.

Sreesanth too has been struggling with injuries, returning home last year from Bangladesh and Sri Lanka after damaging his thigh and knee.