His batting is the lone positive for Zimbabwe in what has been a thoroughly disappointing ODI series against India and all-rounder Elton Chigumbura feels the lack of application on part of the batsmen has played a part in his side's dismal outing. 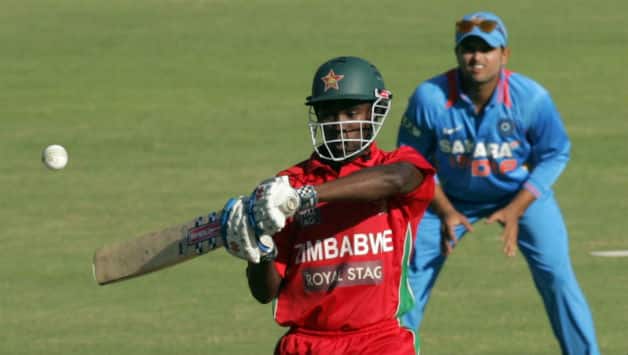 His batting is the lone positive for Zimbabwe in what has been a thoroughly disappointing ODI series against India and all-rounder Elton Chigumbura feels the lack of application on part of the batsmen has played a part in his side’s dismal outing.

The all-rounder, who was unbeaten on 50 as Zimbabwe disintegrated in the fourth ODI, is their leading run-scorer in the series with 142 runs.

“The guys are working hard, but I think it’s just a matter of being smart when we start our innings, especially our first 10 overs when we’re losing two to three early wickets. Besides working hard, I think the guys just need to may be take a little bit of time at the wicket. It all comes together when you stay out there,” Chigumbura said.

After three defeats in Harare, Zimbabwe were expected to perform better on the batsmen-friendly wicket at the Queens Sports Club here, but that was not the case as the hosts collapsed to be all out for 144.

“It was a good wicket to bat on. We all know when we play at Queens, it’s always a batter’s wicket and if you apply yourself then you can make runs. Lack of application has been the problem for the last three games. Losing early wickets, it’s hard to come back, especially if you then keep losing wickets.

“Some of the batters are now coming in at different times that they are not used to. If we can have no early wickets, then the rest of the batters will end up batting in their natural position,” he said.

Chigumbura seems to have developed a liking for Indian bowlers as he has scored 182 runs in six ODI innings and has been dismissed just twice.

“[India] always seem to come at a good time, when I’m playing well,” he said.

“This is the second time I’ve played against them, and mostly that has been on wickets that are good to bat on.”

With the hosts failing miserably against India, Zimbabwe are now looking forward to their next series against Pakistan to salvage some pride.

“We are all trying to improve in every game, but it’s unfortunate on this tour we haven’t done so. But if you look at our past history, playing at home we have done well.

“It’s just one of those tours, where things are not coming together on the batting side. We just need to finish well, and hopefully when Pakistan comes our batting will gel.” Frank Worrell: One of the greatest-ever statesmen in world cricket