The win, though controversial in the end, will be a huge confidence boost for a regularly misfiring Zimbabwe.

Zimbabwe have stunningly beaten Pakistan in the second One-Day International (ODI) at Harare by five runs on the Duckworth/Lewis method (D/L) after play was called off at a crucial stage of the game. Zimbabwe outplayed Pakistan in every single department for good part of the game. Their batting was a collective effort which saw them post a challenging 276 for six on a tricky surface, while the bowling struck with wickets at regular intervals early on in the innings to diminish Pakistan’s chances of victory significantly, until Shoaib Malik and the lower-middle order batsmen and tail-enders revived hopes. The win, though controversial in the end, will be a huge confidence boost for a regularly misfiring Zimbabwe. SCORECARD: Zimbabwe vs Pakistan 2015, 2nd T20I at Harare

Needing 277 to victory, Pakistan had the dual challenge of maintaining wickets while also keeping the scoreboard ticking at a good rate. however, the top order endured a disastrous start with the openers getting out very cheaply. Azhar Ali scored one run of 11 balls before getting dismissed, while debutant Bilal Asif had the worst possible start to his international career, getting out for a duck. Both wickets were taken by Tinashe Panyangara. Live cricket updates: Zimbabwe vs Pakistan, 2nd ODI at Harare

No sooner had Pakistan recovered from the loss, than Luke Jongwe got Asad Shafiq to edge to the wicketkeeper for one run. Pakistan were left reeling at eight for three at that stage. It was then Mohammad Hafeez and Shoaib Malik at the crease to try and rescue Pakistan from a dire position. They were starting to settle down, but in a brilliant bit of fielding Mohammad Hafeez was run out for 27 off 41.

Malik however was keen to stay on and try his best to take Pakistan over the line, however partners kept betraying him at the other end which impeded the momentum in his knock. Sarfraz Ahmed fell cheaply for nine runs to Chamu Chibhabha. The dismissal could be credited to the oddity of the pitch as the ball stuck in and came late onto the bat and the drive lobbed up straight to Sean Williams at extra cover for a easy catch.

Mohammad Rizwan was dismissed for eight by Graeme Cremer, who was caught at slip by Nyumbu. Aamer Yamin was the next batsman in and he provided ample support for Malik. As he grew in confidence, he took over the scoring role and beyond a point the partnership really began to threat Zimbabwe’s win. Both batsmen scored their fifties and were looking adequately equipped with self-belief to pull of a miracle-win. They were assisted by a few sloppy fielding attempts including a dropped catch of either batsman. But Yamin was dismissed in the 40th over by Chigumbura and Zimbabwe heaved a sigh of relief.

The next batsman Riaz was dismissed in a brilliant bit of athletic effort by Chigumbura again. Riaz mishit the ball and the ball rolled to the side, but he tried to sneak in a quick single, but Chigumbura swooped in, collected the ball and before Riaz knew it Chigumbura’s throw dislodged the bails. While Malik continued to resist, the asking rate increased drastically, but he had support at the other end in form of Yasir Shah.

The end of the match, which was steadily heading to be a cracker, was then suspended by umpires due to bad light with two overs to go and Pakistan needing 21 runs with two wickets in hand. The likeliness that play will resume is dim given that it will only get further dim now. Pakistan were pushed in a dark corner midway through the match, but they came back strongly later in the innings with Shoaib Malik, Aamer Yamin and Yasir Shah staging a miraculously reviving Pakistan. At the stage of suspension, the match could have gone either way, but if the play doesn’t resume, it will mean Pakistan lose by five or six runs on the D/L method.

After the period of rain the clouds made the atmosphere dark and Zimbabwe were reluctant to play given the wetness of the ball and lack of proper visibility in the deep, but the umpires kept play going despite repeated requests. Pakistan will be most distraught that the decision was made at such a crucial stage in the match after raising their hopes of a miracle-victory.

Earlier, Zimbabwe were helped on to a competitive score primarily due to a diligent knock by opener Chamu Chibhabha who anchored the innings with a hard-worked 90. His efforts were consolidated by skipper Elton Chigumbura and Sikandar Raza who gave impetus to the innings in the finishing overs with some lusty big hits. Chigumbura scored 67 off 55 balls, while Raza scored 32 off 21 balls. Wahab Riaz bowled well and took four wickets but conceded 63 runs in his 10 overs. 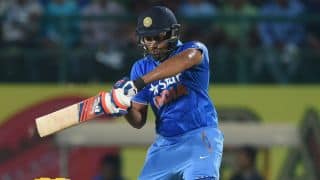