Currently, Zimbabwe are 51 for the loss of three wickets with Brendan Taylor batting on eight .

Earlier, West Indies won the toss, elected to field first and posted a mammoth total of 372 for the loss of two wickets. Chris Gayle was the highlight of the innings, scoring a massive 215 off 147 deliveries, while Marlon Samuels remained unbeaten on 133. Catch live updates of the match between West Indies and Zimbabwe here 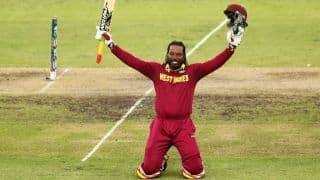