Their historic Test win over Pakistan has propelled Zimbabwe's cricketers to best-ever ICC rankings with skipper Brendan Taylor zooming up 15 rungs to be at a career-best 25th in the latest list issued on Sunday. 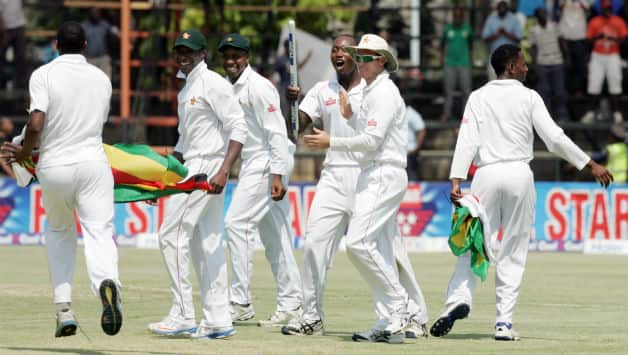 Their historic Test win over Pakistan has propelled Zimbabwe‘s cricketers to best-ever ICC rankings with skipper Brendan Taylor zooming up 15 rungs to be at a career-best 25th in the latest list issued on Sunday.

Taylor’s rise came following knocks of 51 and 27 in the Harare Test, which Zimbabwe won by 24 runs yesterday.

Also moving up on the batting list was Hamilton Masakadza, who is now at 66th (up by 40 places) after his knocks of 75 and 44.

Meanwhile, Pakistan captain Misbah-ul-Haq‘s contribution of 33 and 79 not out may have gone in vain, but he has moved up three places to 12th on the Reliance ICC Player Rankings for Test Batsmen, the ICC said in a statement.

For Zimbabwe, player of the match Tendai Chatara is now in a career-best 55th spot (up by 21) in the latest Reliance ICC Player Rankings for Test Bowlers after his match figures of six for 105, including a match-winning spell of five for 61 in the second innings.

Meanwhile, Abdur Rehman has moved up two places to 11th after his figures of three for 47 and two for 40 in the match.

The other Pakistan bowler to move up is Junaid Khan, who is now at a career-best 32nd (up by two).

Saeed’s 11-wicket haul in the first Test had helped him gain 36 ratings points to regain the number-three slot from Herath. However, after picking up just three wickets in the second Test, Saeed has dropped 34 ratings points and has now returned to fourth position.