Zimbabwe also broke their dry spell of not winning a single match throughout India's tour.

Zimbabwe recorded their first-ever victory over India in the Twenty20 International (T20I) format by beating them by 10 runs in the second and final T20I at the Harare Sports Club in Harare on Sunday, levelling the two-match series 1-1 in the process. With the victory, Zimbabwe also recorded the first victory of India’s tour, having lost the first T20I and the ODI series 0-3. India finished at 135 for nine after 20 overs, with Mohit Sharma and Sandeep Sharma remaining unbeaten on 3 and 1 respectively. Graeme Cremer was the pick among the Zimbabwean bowlers, taking three crucial wickets while conceding only 18 runs from four overs. SCORECARD: India vs Zimbabwe, 2nd T20I at Harare

India were in for a shaky start, losing the wicket of Ajinkya Rahane in the very first over. The India skipper hit a boundary off the second ball of the innings, and was run-out of the very next delivery. Murali Vijay then joined hands with Robin Uthappa, as the two helped India recover from the early blow in no time by taking on the Zimbabwean pacers. Wicketkeeper batsman Uthappa was scoring a majority of the runs at this stage, with the visitors scoring at a rate of over nine per over. The pair eventually brought up the 50-run stand in no time, with Uthappa batting in the 40s. UPDATES: India vs Zimbabwe, 2nd T20I at Harare

Graeme Cremer came in to bowl the seventh over, and things were not the same thereafter. The leg-spinner castled Vijay off the first ball of the over, beating the batsman completely as Vijay departed for an 11-ball 13. Three balls later, Manish Pandey was trapped leg-before by a googly, as India were reduced to 61 for four. Sean Williams came to bowl the next over, and takes a safe return catch off the bat of Uthappa, who departed after scoring 42 off 25 balls. The alarm bells were ringing at this stage for India, who had collapsed to 69 for five.

Stuart Binny and Sanju Samson undid some of the rapid damage with a 36-run partnership for the sixth wicket, with the two patiently settling for the ones and twos during this period. India seemed to be recovering at this stage of the match, and India pinned their hopes on the two at this stage. Zimbabwe needed a breakthrough desperately at this stage if they were to stay alive in the game. Fittingly enough, it had to be Cremer, along with Chamu Chibhabha to effect the dismissal. Binny came down the track to attack Cremer, and ran too close to the pitch to result in a mishit towards long-off. Chibhabha came running in from that position, and took a brilliant running catch that once again changed the course of the match.

Samson did not last long either, departing for a 24-ball 19, as India lost too many wickets towards the latter overs, with the Zimbabwean bowlers restraining the Indian tail-enders from going for the big hits by bowling full and outside off. The visitors were left needing 19 to win off the last over. Mpofu bowled a tight last over. not conceding more than eight. Sandeep faced the last delivery, getting his maiden T20I runs off it.

Earlier Zimbabwe finished on 145 for seven at the end of their quota of 20 overs, putting up a batting performance that was better than what they had done in the entire series, barring the first ODI. Chibhabha top-scored for the hosts with a 51-ball 67, laying the foundation for Zimbabwe to finish on a competitive total and winning the ‘Man of the Match’ award for that effort. The Indian pacers fought back in the death overs though, preventing the Zimbabweans from racing away to a total within the range of 180. Bhuvneshwar Kumar finished as the pick among the bowlers, taking two wickets for 26 runs from four overs. Akshar Patel was however, the most economical of the lot, conceding only 23 from four overs while taking the wicket of Sean Williams.

It was Zimbabwe’s day to reckon, as they won the toss and elected to bat in a series of firsts at the start of the match. Regular skipper Elton Chigumbura and Neville Madziva missed out on the match due to injuries, and were replaced by Sean Williams and Malcolm Waller. Pakistan-born batsman Sikandar Raza took up the role of the Zimbabwean captain for the match. India, on the other hand, elected to rest Harbhajan Singh for match, leading to Sanju Samson making his first international appearance, getting his T20I cap from Murali Vijay. ALSO READ: Sanju Samson makes international debut

Man of the Match & Man of the Series: Chamu Chibhabha. 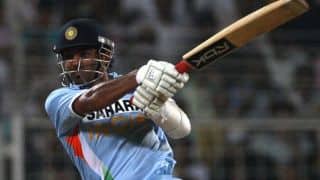 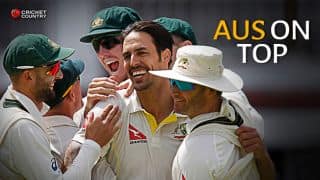