A disciplined bowling performance from Zimbabwe saw them pick up two wickets and restrict the New Zealand scoring on the second morning of their Test match. 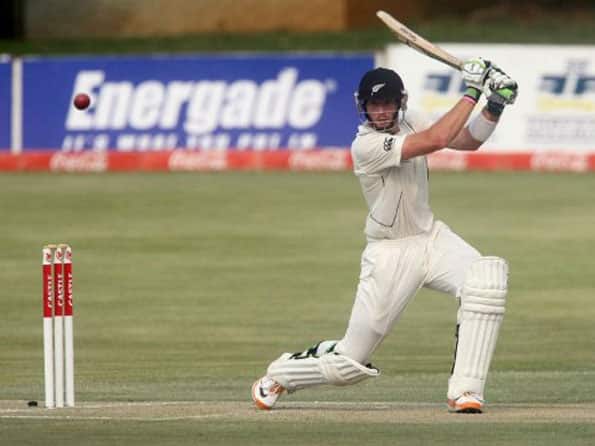 A disciplined bowling performance from Zimbabwe saw them pick up two wickets and restrict the New Zealand scoring on the second morning of their Test match.

New Zealand went to lunch on 327 for five, with debutant Dean Brownlie on 27 not out and Daniel Vettori still waiting to get off the mark.

Morning rain meant that play was delayed by 45 minutes at the start of the day by a wet outfield, but with lunch pushed back by half an hour only 15 minutes were lost from the opening session.

With conditions freshened up by the rain, and a relatively new second ball still in hand, Njabulo Ncube picked up his first Test wicket in his first over of the day as he snatched the big scalp of Ross Taylor.

The New Zealand captain failed to add to his overnight score of 76 before he chased a wide delivery and edged through to the wicketkeeper Regis Chakabva.

Chris Mpofu picked up the other wicket of the session, surprising BJ Watling with a lifting delivery that caught the edge on its way to Chakabva, who took a good one-handed catch low to his right.

The majority of the morning saw Zimbabwe set defensive fields and bowl strict lines, which allowed the Black Caps to add just 52 runs over the course of 27 overs.

Martin Guptill’s second Test century formed the backbone of the New Zealand innings on the first day, when his 109 allowed the tourists to reach 275 for three at stumps on Tuesday evening. (AFP)