Zimbabwe set 164–run target against Bangladesh in their first Twenty20 International (T20I), at the Sheikh Abu Naser Stadium in Khulna on Friday. From their allotted 20 overs, Zimbabwe somehow wasted an excellent chance to put up a big score and could manage only 163 for 7. Zimbabwe are touring Bangladesh for a four-match series ahead of the ICC World T20 2016 to be held in India, as the series will provide an excellent opportunity for both the teams to gear up for the mega tournament which is just a couple of months away. In the first T20I, it was Zimbabwe who won the toss and made most of the favourable batting conditions at Khulna, with their openers Hamilton Masakadza and Vusi Sibanda providing a century stand for the first wicket. LIVE CRICKET SCORECARD: Bangladesh vs Zimbabwe, 1st T20I at Khulna

After electing to bat first, it was Hamilton Masakadza who made most of the opportunity, and made his intentions clear right from the beginning. He started off with two consecutive boundaries off the Bangladeshi captain Mashrafe Mortaza in the third over of the match, and there was no stopping Masakadza since then.

Masakadza continued to attack the Bangladeshi bowlers as Shakib Al Hasan was smashed for a six and a four in the fifth over of the game. On the other hand, his opening partner Vusi Sibanda provided appropriate support from the other end. While Masakadza looked to attack, Sibanda was content with looking for the singles and doubles and also giving his partner more chances to score.

Sibanda was removed by Shakib in the 12th over, but only after the batsman had hit a four and a six to the ace Bangladeshi all-rounder. Sibanda scored 46 off 39 balls, studded with four boundaries and two sixes.

Masakadza fell in the 18th over only after hitting 9 boundaries and 2 sixes to score 79 off 53 balls, and after that Zimbabwe lost the plot as wickets fell in heap. From 147 for 2, they slipped to 153 for 5 and their hopes of a daunting total were dashed completely. 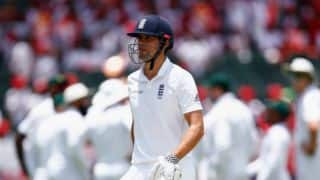