Zimbabwe will take on South Africa in the first floodlit Test to be played in South Africa - and the first scheduled four-day Test anywhere since Pakistan toured New Zealand in 1972/73.

Paarl: Zimbabwe will get a taste of floodlit cricket with a pink ball when they play a day-night match against a South African Invitation XI over three days at Boland Park, starting on Wednesday.

It will be the only warm-up match for the Zimbabweans ahead of a one-off day-night Test against South Africa from December 26 to 29, the first floodlit Test to be played in South Africa – and the first scheduled four-day Test anywhere since Pakistan toured New Zealand in 1972/73.

De Villiers has not played in a Test since captaining South Africa against England in January 2016. He missed three series because of an elbow injury and then took a break from the five-day format, ceding the captaincy to Faf du Plessis.

Steyn suffered a broken shoulder in a Test in Australia in November 2016 and his only competitive cricket since then has been in five Twenty20 matches for the Titans franchise in the past month.

Despite Steyn’s lack of match practice, new coach Ottis Gibson said recently that a fully fit Steyn would be an automatic choice for the Test team.

De Villiers has missed 17 Tests since his previous appearance, while Steyn has missed 14.

Despite being neighbours, South Africa and Zimbabwe have only played eight Test matches against each other since they first met in 1995/96, while it is Zimbabwe s first Test tour of South Africa since 2004/05. South Africa have won seven matches, with one drawn.

Captain Graeme Cremer, batsmen Hamilton Masakadza and Brendan Taylor and fast bowler Chris Mpofu were all on the 2004/05 tour, when South Africa won both Test matches, while De Villiers is the only South African still active who played in the series. 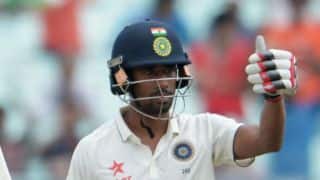