Australia captain Michael Clarke could return for the second round of triangular fixtures.

Michael Clarke is hoping to recover from a hamstring injury in time to lead Australia against Zimbabwe in Sunday’s triangular series clash in Harare. Clarke missed Australia’s first two games of the competition, in which they have beaten Zimbabwe by 198 runs and then lost to South Africa by seven wickets, after picking up the injury during a training session.

However, having spent a significant part of the past week in the team room receiving treatment, Clarke could return for the second round of triangular fixtures.

“I hope so,” he said. “But there’s no point getting on the park just to play a game when we’ve got 13 other guys here that really want to play and are 100 per cent fit to play.

“So I don’t want to do the wrong thing by the team and my teammates, but if I pull up okay then I’m 100 per cent fit to perform.”

Should Clarke come through Australia’s final training session unscathed, Australia will need to shuffle their pack, with offspinner Nathan Lyon also likely to return after he was surprisingly left out of the defeat to South Africa.

While South Africa legspinner Imran Tahir returned figures of 2 for 45, Australia went into the match without a specialist spinner and failed to defend a target of 328.

“The wicket has been pretty low, pretty slow and pretty flat so we need to find ways to take wickets,” Clarke said.

Fast bowler Mitchell Johnson could be rested for Sunday’s clash to make space for Lyon, while one of the batsmen will need to be sacrificed if Clarke is passed fit. Zimbabwe must win the game to stay in with a realistic chance of making Saturday’s final after both Australia and South Africa recorded bonus point wins against them in the first round.

Although the hosts have at times held their own with the ball – Prosper Utseya’s hat-trick against South Africa on Friday being the obvious highlight – their batsmen have failed to compete with the strong opposition.

Zimbabwe have crossed 200 just once in their last six ODI innings, and were bowled out for 152 in the first game against Australia. “It comes down to being ruthless,” captain Elton Chigumbura said. “Once you get yourself in, you must take the team through. “We are having guys with good starts, but they are not following up. That’s the major thing that we need to address.”

Wicketkeeper-batsman Richmond Mutumbami was on Friday ruled out of the remainder of the series after he suffered a fractured arm whilst batting in the nets, so Brendan Taylor will keep the gloves. 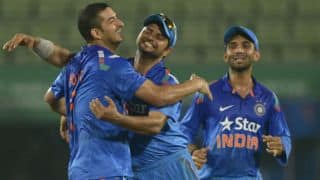