Australia were 181 for four at the end of 40 overs in the fifth One-Day International (ODI) of the triangular series at Harare. George Bailey was batting on 27, and Mitchell Marsh was batting on seven. Philip Hughes missed his century as he got out on 85. Glenn Maxwell too fell quite early in his innings and scored just two. Both batsman got out trying to accelerate. 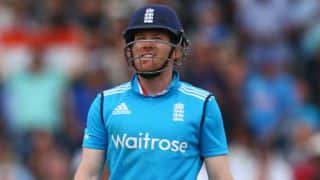