Michael Clarke will be missing Wednesday's fixture against South Africa.

Last year Proteas quick Morne Morkel cracked Clarke’s shoulder in a brutal exhibition of fast bowling during the Cape Town Test and he smells blood again. Allan Donald, South Africa’s bowling coach, lit the fuse for another explosive series by revealing Morkel is currently stalking his prey, focused on getting stuck into Clarke once more with another barrage.

“There’s no question, I think Michael will know that Morne is out there to try and hunt him down. It’s always in the back of your head. When you’ve had one bowler that has done that to you before, he might do it again. “It’s just about planning and being very smart in how you do that in a one-day scenario,” said Donald.

Meanwhile Clarke replied by saying he’s prepared for what’s coming. “I’ve been ready my whole career, There’s been a lot made of it because I got hit a couple of times but I don’t think it’s any different. Morne is a very good bowler. Dale Steyn is a very good bowler. Playing against South Africa has always been tough. ” Clarke said. India vs England 2nd ODI at Cardiff: India aim to get their act together against England 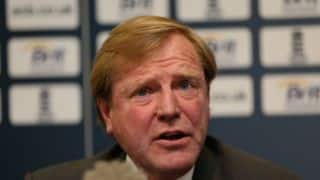