Zimbabwe vs Afghanistan, 2nd ODI at Bulawayo: Usman Ghani on the verge of a century

Zimbabwe vs Afghanistan, 2nd ODI at Bulawayo: Usman Ghani on the verge of a century

Afghanistan reach 181 for five at the end of 40 overs.

Afghanistan were at 181 for five at the end of 40 overs of play at the second One-Day International (ODI) at Bulawayo. Usman Ghani  and Shafiqullah were unbeaten at 96 and 1 respectively while Donald Tiripano and Tinasha Panyangara in their second spells, having bowled six overs each for 40 and 24 runs respectively.

Ghani is on the verge of scoring his first ever ODI ton and the seventh overall for Afghanistan. The opener’s fabulous innings of 96 off 121 deliveries studded with eight fours and a six. He however has been the only standout performance from the Afghan camp so far as the likes of  Mohammad Nabi and Rahmat Shah fell at identical scores of 22.

The Zimbabwean  attack made good use of the track to pick wickets at regular intervals in the middle overs to restrict the flow of runs. 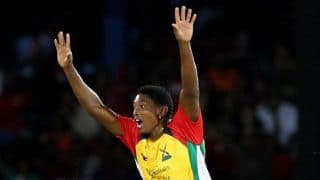