India's regular Test opener played the last of his 14 ODIs in West Indies in 2013.

After being selected in the limited-overs series against Zimbabwe, India batsman Murali Vijay said following couple a good run in Tests, he expected to be called up in the One-Day Internationals (ODI), and added that he would grab the opportunity with both hands that has come his way. READ: India squad for Zimbabwe tour announced

“It is a happy feeling to make a comeback to ODIs. I have been batting well in Tests, so I just have to grab the opportunity that has come my way,” Vijay told ESPNcricinfo in an interview. “As a player, I was expecting the call-up. I was the third opener for four series, including the 2013 Champions Trophy, but could not get a game. I have always believed in myself. It is not about competing with anybody. I always compete with myself and I look to improve as far as I can,” the Tamil Nadu opener said.

Middle order batsman Ajinkya Rahane was on Monday named captain of the 15-member team that will tour Zimbabwe in July as Mahendra Singh Dhoni and Virat Kohli, among other seniors, were rested. India face the hosts in the first ODI on July 10. READ: India tour of Zimbabwe 2015: Sending a second-string side has more pros than cons

When asked about the things that would help him in the ODIs after the success he enjoyed in the last two years in Tests, he said: “[It is] the mental discipline. The game is not going to change that much. It is just the way I apply myself in different formats and according to the situation, I have to up the ante. “With the new playing conditions from this series, I will have to adapt according to the ground situation, the opposition game plan, and accordingly cash in.” In terms of numbers, Vijay doesn’t have a half-century in ODIs.

“I am not a guy who will give excuses, but you have got to consider the number of matches I have played on the trot. That matters a lot as a batsman. It is not an excuse. I never got a string of ODIs or series. I had to adapt to that in the past,” the 31-year-old, who has scored 253 runs in 14 ODIs, concluded. READ: Murali Vijay, Shikhar Dhawan achieve career-best rankings in Tests

Vijay also spoke about his mindset on batting upfront in Tests, the skills required to tackle batting requirements in Twenty20 matches, the focus on fitness and his love for surfing, in the interview. 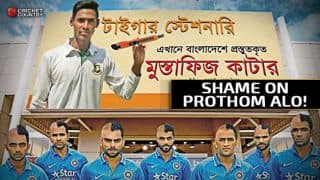