Black Caps will want to continue their winning ways as they take on South Africans next for ODI and T20I series.

The third and the final One-Day International (ODI) between New Zealand and Zimbabwe that will be played at Harare on Friday is the series decider. Both the sides have won a game each of the first two ODIs. The previous match turned out to be a one-way road as the visitors steamrolled the Zimbabweans by a whopping 10-wicket margin after bowling them out for a mere score of 171 in 50 overs. It was a must-win situation for the Black Caps after they shockingly lost the opening match at the same venue. The 2015 ICC Cricket World Cup runner’s up took up the challenge seriously against the lower-ranked team. READ: Martin Guptil, Tom Latham’s record partnership steers New Zealand to 10-wicket victory in 2nd ODI vs Zimbabwe at Harare

After going down to 68 for 5, Sikandar Raza’s ton helped the hosts to post a fighting 235. However, when the New Zealand openers came in to bat, it seemed inadequate as both openers — Martin Guptill and Tom Latham — had a century each to their name by the end of the match, crushing the confidence of Zimbabwe that the latter had gained after dominating the third-ran ked ODI team with both bat and ball in the first ODI.

New Zealand’s death bowling, however, remains a concern. The attack includes the likes of Mitchell McClenaghan, Matt Henry and Nathan McCullum, who have a fair bit of international experience compared to their opponents; unfortunately, the trio have not been able to show their true potential. For instance, when the men in red collapsed to 68 for 5 in the second ODI, the visitors were expected to bowl them out under 200, or even 150. Instead, Raza tore the Kiwi bowling attack apart with his unbeaten 100off 95 balls, thereby becoming the first No. 7 batsman from Zimbabwe to score a ton. READ: Zimbabwe vs New Zealand 2015, 2nd ODI at Harare: Tom Latham, Martin Guptill enter record books

Since the first two games of the three-ODI series have been one-sided, it will be interesting to watch which team will come on top to clinch the series. While the series victory will be one of the best results for the hosts in the recent times, the Black Caps will want to continue their winning ways as they take on South Africans next for ODI and T20I series. 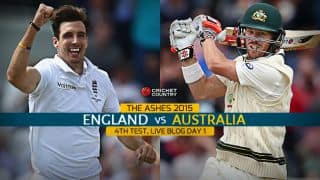