Catch the Live Updates of the first ODI between Zimbabwe and South Africa here.

(After a win in the solitary Test match, the Proteas will now face Zimbabwe in a three-match ODI series. Catch live cricket scores and live updates here)

And that’s it! Zimbabwe couldn’t play out the 50 overs. South Africa have secured a comfortable victory. It was a terrific team performance by the Proteas! The hosts played a game that they would like to forget, and hope to put a better performance in the second ODI at the same venue.

Wickets have started tumbling for the hosts, and they may not be able to bat out the 50 overs. Elton Chigumbura, the Zimbabwean skipper, is watching the carnage from one end.

Zimbabwe now need another 125 runs from 20 overs to win now. Jongwe and Chigumbura look as if they’ve already decided that it is impossible. The South African bowling has done a good job, despite the absence of key bowlers like Dale Steyn and Morne Morkel. Ryan McLaren has been specially impressive, and has conceded just 22 runs in eight overs.

Masakadza and Williams had provided a glimmer of hope for the hosts, but that has gone now. Jongwe and Chigumbura are looking to just bat out the overs now.

And just as the partnership reaches 100, Masakadza falls! Full marks to him for the effort. Wayne Parnell makes the crucial breakthrough in an over, which goes for 11 runs but still ends up as a good one for the visitors. Sean Williams hangs around for a while longer, but he too departs right after completing his half-century. Imran Tahir makes the breakthrough!

Hamilton Masakadza has scored a brilliant half century, in a match that has tilted hugely in South Africa’s favour so far. Masakadza and Williams have combined really well so far. Their partnership would be putting some doubts in AB de Villiers’ mind.

The hosts are finally showing some resistance in the middle. Sean Williams and Hamilton Masakadza have combined well, and look to be building a steady partnership.

Brendan Taylor too fails with the bat as he falls to an Aaron Phansigo delivery. The hosts are in serious trouble now! The Proteas are looking set to win this match by a huge margin now. They are certainly not missing the services of Dale Steyn and Morne Morkel. The required run rate has crept up to 7.5.

Another one bites the dust! Richmond Mutumbami has been dismissed by Ryan McLaren. Kyle Abbott has been extremely economical for South Africa, conceding just three runs in his first four overs. The Zimbabweans really need to get going soon, as the required run rate has already risen to 6.9 runs per over.

South Africa have taken their first wicket! Vusi Sibanda edges one off a Wayne Parnell delivery, and Quinton de Kock makes no mistake in catching that. The visitors are without the services of Dale Steyn, Morne Morkel and Vernon Philander which has weakened their bowling arsenal considerably. Hamilton Masakadza is the new man in for Zimbabwe.

John Nyumbu gets the treatment, as Amla hits two consecutive sixes in the 47th over. AB de Villiers too hits a six, but fails to clear the fence in the next delivery. He is gone after scoring 21 off 12 balls. JP Duminy enters the field with three overs to go,  and doesn’t take much time to settle. South Africa set a target of 310, and the hosts will need to produce something special to chase it down.

Hashim Amla scores a terrific century. He takes 120 balls to reach the landmark, and puts South Africa in a very good position. Du Plessis is gone though, as he looks to hit a Prosper Utseya delivery for six, but the ball ends up in Vusi Sibanda’s hand instead. AB de Villiers is the new man in, and he makes an impressive start.

Du Plessis finally breaks the shackles in the 40th over. He dispatches Luke Jongwe to four back-to-back boundaries, and brings up his half century in style. The visitors score 19 runs off the 40th over, and 15 runs off the 41st. Amla is nearing his century. The Zimbabweans who kept things tight for so long, suddenly seem to have no answers.

Two tough catches were dropped in the 35th over, and it remains to be seen if Hashim Amla will make them pay heavily for the missed chances. Amla and du Plessis are not able to find the boundaries, and the hosts are playing fantastic cricket to restrict the Proteas.

Hashim Amla and Faf du Plessis have started scoring at a steady rate, but the boundaries are hard to come by for the visitors. They should start picking up the pace now. Du Plessis has been excruciatingly slow, and has scored just 27 off 51 balls.

Hashim Amla completes his half-century. The South African scoring rate though, has dipped after the dismissal of Quinton de Kock. John Nyumbu and Prosper Utseya are bowling in tandem, and managing to keep things tight for the hosts. South Africa still seem to be heading towards a total of 300 considering the number of wickets they have in hand.

Zimbabwe take their first wicket. The big-hitting de Kock has been dismissed by John Nyumbu. Brendan Taylor takes the catch. Faf du Plessis is the new man in, and he makes a slow start scoring just one run out of the first nine deliveries he faces.

The visitors continue to score at a steady rate, and look set to achieve a 300 plus total. Quinton de Kock has reached a fabulous fifty, and certainly looks like a player who’ll play for South Africa for a long time. Prosper Utseya has bowled economically, giving away just seven runs in his two over.

South Africa have upped the ante with de Kock doing the bulk of the scoring. The wicketkeeper-batsman is looking in great touch and clearing the boundary with ease. Amla in the meanwhile seems to be playing the anchor role. The Zimbabwean bowlers can’t seem to find any answers at the moment.

The South Africans start the game cautiously, with no run being scored in the first over. The hosts are looking sharp in the field, and they seem determined to secure a victory here.

Hello and welcome to Cricket Country’s coverage of the first One-Day International (ODI) between Zimbabwe and South Africa at Bulawayo. Earlier, the Proteas played Zimbabwe in a solitary Test match, which the visitors easily won by 9 wickets.  They will now face Zimbabwe in a three-match ODI series, followed by a triangular series which also features Australia. Both teams will look to get some much needed practice and strike the right balance in their teams ahead of the upcoming ICC World Cup 2015. I am Sameer Jha and I will be bringing you the live updates of the match. 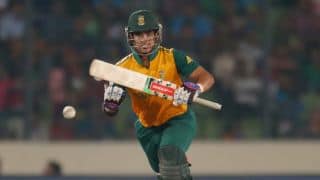