.@OfficialCSA wins by 9 wickets against Zimbabwe who proved firm opposition in the Only Test Match #ZimvSA pic.twitter.com/xbXhL1IoCa

South Africa 44/1 Overs 10.4
Petersen 17 (30) du Plessis 5 (6)
South Africa won by nine wickets as expected, but a lot of positives to take for Zimbabwe. They resisted with a lot of grit for three days. Once they opted to bat, they were taken past 250 with Taylor’s 93. Their bowlers, led by debutant Nyumbu, were very disciplined, including Chatara and Panyangara but it was hard to not let SA take a lead. Fifties from Elgar, du Plessis, de Kock and Duminy got them close to 400 after Nyumbu’s five-for and one session took the game towards SA on the fourth day. Dane Piedt is given the man of the match award.
South Africa 39/1 Overs 9.4
Petersen 17 (30)
Outt!! Elgar drags on. Zimbabwe have something to cheer about. Chatara gets Elgar. South Africa only needs
Elgar b Chatara 21 (35)

South Africa 30/0 Overs 7
Elgar 17 (24) Petersen 13 (27)
South Africa require another 10 runs to win this match. Elgar and Petersen are in full control. Zimbabwe have already used four bowlers.
Zimbabwe 181 Overs 76.2
Chatara o (11)
All over for Zimbabwe!! Panyangara out to Styen, who got his second wicket in the innings. Zimbabwe just have a lead of 40 runs which mean South Africa just need 41 runs to win this match and the series. After beating Sri Lanka and Sri Lanka, it will be second series win for new South African captain Hashim Amla.
Panyangara b Steyn 2 (6)
Zimbabwe – 178/9 Overs 75.1
Chatara o (3)
Out!! Another wicket for Piedt. 4th one in the innings, 8th in the match. What a debut for him.
Nyumbu c & b Piedt 13 (85)
Zimbabwe – 178/8  Overs 74.3
Nyumbu 13 (51)
Out!! Mutumbami’s useful innings comes to an end. Dale Styen finally has a wicket in the second innings.
Mutumbami c de Kock b Steyn 43 (69)
Zimbabwe – 141/7  Overs 68.0
R Mutumbami 15, J Nyumbu 4
Tea at day four!! Zimbabwe just managed to level South Africa’s first innings score. They are seven down. Last session was completely won by South Africa. Hosts score only 61 runs in this session and lost five important wickets. South Africa is back in the game in big time.

Zimbabwe 124/7 Overs 55.4
Mutumbami 2 (7)
Williams gone too!! Seven down Zimbabwe. They are still 17 behind and they have just three wickets in hand. Zimbabwe just scored 44 runs and lost five wickets after lunch. South Africa bounced back strongly and showed their class.
Williams c Duminy b Morkel 3
Zimbabwe 121/6 Overs 54
Williams 3 (15)
Sixth one down!! Chakabva gone too. The match could end in fourth day itself. What an anticlimax.
Chakabva b Morkel 15 (23)
Zimbabwe 113/5 Overs 48.4
Chakabva 10 (7)
Taylor gone!! Dane Piedt has another. Now South Africa is complete control of this Test match. Zimbabwe lost the plot completely. Taylor pressed a long way forward for the ball that has been turning the whole day, and it did enough again after pitching outside off to go to Elgar after taking a bit of bat. Hosts are still
Taylor c Elgar b Piedt 5 (9)
Zimbabwe 98/4 Overs 46.2
Taylor 1 (3)
Another one gone!! Piedt gets Sibanda. Both the set batsmen are gone. Zimbabwe is losing the plot big time. They are 43 runs behind.
Sibanda c & b Piedt 45
Zimbabwe 98/3 Overs 45.4
Sibanda 45 (109)
Vermeulen, OUT!!, Styen gets him lbw! It was a quick delivery swinging in from just outside off, pitched back of length, Vermeulen was trapped on the back foot on his toes in an attempt to defend but the ball jabbed in to hit him just below the knee roll in front. Bad timing of wicket for ZImbabwe.
Vermeulen lbw b Steyn 21 (68)
Zimababwe 80/2 Overs 41
Sibanda 38 (99) Vermeulen 10 (50)
Lunch!! Zimbabwe have done extremely well there, lost the lone wicket of the nightwatchman Tiripano, who also survived with a lot of fire from Styen and Morkel. South Africa have created chances, specially the spinners, and their pacers did not look that effective. Sibanda and Vermeulen are making them work hard for the wickets.

Wonder why Hash doesn’t get JPD from other end. It’s turning miles. #zimvsa

Zimababwe 58/2 Overs 28.1
Sibanda 30 (71)
Out!! Nightwatchman Tiripano is gone. Debutant Piedt gets his wicket. But Tiripano did his job. Experienced Vermeulen is at the wicket now. He needs to form a decent partnership with Sibanda.
Tiripano b Piedt 5 (85)
Zimababwe 47/1 Overs 26
Tiripano 5 (61) Sibanda 23 (60)
Drinks!! Excellent first hour for Zimbabwe. They have managed to see off the initial spells of Styen and Philander. Now the debutatn Dane Piedt, who has taken four wickets in the first innings is  into the attack. Slip, leg slip, short leg and short midwicket in place.

Zimbabwe 38/1 Overs 18
Tiripano 2 (34) Sibanda 17 (39)
Not a bad start of Day four of the one-off Test against South Africa for Zimbabwe. They have added 10 runs without losing any wicket. Styen and Philander have started for South Africa.

Hello  and welcome to CricketCountry’s coverage of the fourth day’s play between South Africa and Zimbabwe at the Harare Sports Club. This is Sandipan Banerjee, and I will be bringing you the updates of the match.

John Nyumbu became the second Zimbabwean to record a five-wicket haul on Test debut but South Africa still put themselves in the driving seat on day three of the one-off Test, reported AFP.  Nyumbu sank to his knees and pointed to the heavens after taking figures of five for 157 in a South African total of 397 all out, which gave the tourists a lead of 141 on first innings.

Morne Morkel then dismissed opener Hamilton Masakadza before Zimbabwe reached stumps on 28 for one in their second innings, still trailing by 113 runs. Only fast bowler Andy Blignaut had taken five wickets on Test debut for Zimbabwe, but Nyumbu chipped away throughout the day to add the scalps of Faf du Plessis, Dale Steyn and JP Duminy to the two wickets he had picked up on Sunday.

Du Plessis was out for 98 shortly before the lunch interval after a 264-ball innings, ending a 119-run stand with Quinton de Kock for the fifth wicket. De Kock also missed out on a century when he chipped left-arm spinner Sean Williams to midwicket to depart for 81, having showed the most intent out of the South Africans. 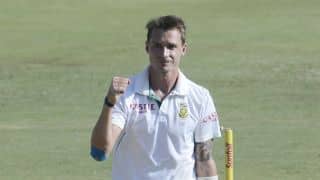