Taylor and Mutumbami rescued Zimbabwe from 120 for five to 165 for five at Tea.

Brendon Taylor rescued Zimbabwe  from 120 for five to 165 for five, with young wicket-keeper batsman Richmond Mutumbami to Tea on the first day of one-off Test against South Africa at Harare. It happened after they lost three wickets quickly. This partnership has already put together 45. Both the batsmen took their time initially. Specially Mutumbami, who looked really good. He was impressive in the recently concluded series against Afghanistan too.

Meanwhile Brendan Taylor, the Zimbabwe captain made a fighting half century. His fifty came in 89 balls. It is an important knock in the context of the game. As wickets are tumbling on the other end, Taylor hold one end up and scored important runs for his team. A captain’s knock for him.

Earlier Dane Piedt, the South African off spinner, took two more wickets after Lunch. He got the wickets of Hamilton Masakadza (45) and Regis Chakabva (0) in the 33rd over of the match. He also took the wicket of Mark Vermeulen (14) in his first ball in Test cricket. Piedt become the 19th bowler and second South African after Bert Vogler to take a wicket with his first ball in Tests. After that dale Styen another wicket in the form of Sean Williams (24). From 90 for two, the hosts slipped to 120 for five. Since then Zimbabwe have done well by not losing anymore wicket upto Tea.

In the morning Zimbabwe won the toss and decided to bat first. As expected South Africa made early in road as Vusi Sibanda got out for no score in the third over of the match. In a typical Dale Steyn delivery Sibanda opened the face of the bat to defend eventually nicked it to third slip for Alviro Petersen who took a low catch. 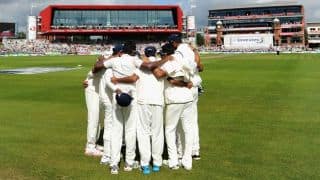 India vs England, 4th Test at Manchester: England end with lead of 215