South Africa 116 for one after 43 overs against Zimbabwe at Harare.

Dean Elgar made a classy fifty as South Africa continues their steady progress after lunch. His fifty came in 131 balls with five boundaries attached in it. This is his second Test fifty.

South Africa started their first innings against Zimbabwe well as they reached 62 for one at lunch on day two of the one-off Test at Harare. The opening pair, Elgar and Alviro Petersen had played out the new ball and added 57 for the first wicket. The first wicket for Zimbabwe in the form of Alviro Petersen was taken by debutant off-spinner John Nyumbu in the second last over before lunch.

It brought Faf du Plessis in the crease to join Elgar. Before that the openers played the first hour carefully. Though there were couple of close calls for the Proteas openers as the new ball was swinging for the Zimbabwe opening bowlers Tinashe Panyangar and Donald Tiripano.

Earlier Zimbabwe made 256 in their first innings. The last pair John Nyumbu and Tiripano added eight runs in day two morning. Last wicket was taken by Dale Steyn, 24th five wicket haul for him. Last batsman out was John Nyumbu. But they have managed to get past 250 mark, which is a significant achievement for the hosts. 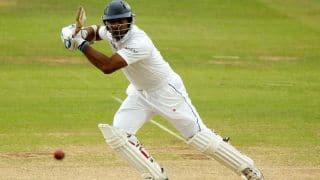 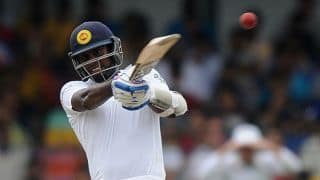