An unbeaten century from Dhananjaya de Silva put Sri Lanka in control of the second and final Test against Zimbabwe after a fluctuating first day at Harare Sports Club on Sunday.

An unbeaten century from Dhananjaya de Silva put Sri Lanka in control of the second and final Test against Zimbabwe after a fluctuating first day at Harare Sports Club on Sunday. De Silva came to the wicket with Sri Lanka struggling on 112 for four after they had lost the toss and been asked to bat but showed greater application than Sri Lanka s top order as he hit his second Test century in just his fifth match. The right-hander added a crucial 143 for the fifth wicket with Upul Tharanga before finishing unbeaten on 100, as the tourists closed the day on 290 for five. Zimbabwe won the toss and elected to bowl first on a pitch boasting a tinge of green, but had a chaotic first hour with the ball. Full Cricket Scorecard: Zimbabwe vs Sri Lanka 2nd Test at Harare

I knew I needed to bat through the innings, De Silva said afterwards. “Playing under pressure is my role, so it made me comfortable. Fast bowler Carl Mumba limped off the field after the first over, and seamers Chris Mpofu and Donald Tiripano were wayward in their opening spells as Sri Lanka progressed to 62 without loss. The breakthrough came from an unlikely source, as part-timer Hamilton Masakadza made an early entry to the attack and Dimuth Karunaratne guided an innocuous delivery straight to gully to depart for 26.

Masakadza then struck in his next over when Kusal Perera s decision to attack the seamer from the start of his innings backfired horribly, as he holed out to long-on. Mumba was able to return to the field soon after, but it was fellow fast bowler Mpofu who struck before lunch when he trapped Kaushal Silva lbw for 37. Although Silva asked for a review, he took too long to do so and so his request was denied. Hawk-Eye showed that the delivery from Mpofu would have missed leg stump.

Sri Lanka went to lunch on 105 for three, and were in trouble soon after the interval when Kusal Mendis edged Donald Tiripano behind to depart for 26. At 112 for four, Sri Lanka were under pressure for the first time in the series but Tharanga and De Silva were unperturbed.

The pair were content to take a patient approach as the pitch flattened out and Zimbabwe tightened up their bowling, seeing Sri Lanka through to tea on 187 for four. We started off badly in the first session, but I think we pulled it back quite nicely as the day wore on, said Masakadza. We would have been happier with one or two more wickets, but I think after the start that we had, we ll take it.

Tharanga fell for 79 in the final session, as he became the first player to be given out on review in Zimbabwe, with the third umpire determining that he had edged a delivery from leg-spinner Graeme Cremer. But De Silva reached three figures shortly before the close of play and was accompanied to stumps by Asela Gunaratne, who was unbeaten on 13. 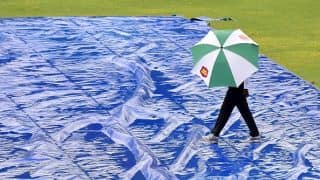 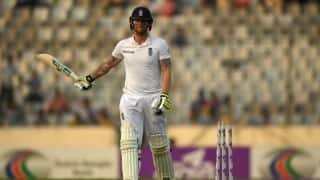