Sri Lanka batting started well with Kaushal Silva and Dimuth Karunaratne added 91 runs for the first wicket against Zimbabwe in the first Test at Harare.

Sri Lanka are completely in control of the first Test against Zimbabwe. Both teams clash in the first of the two-Test series at the Harare Sports Club in Harare. Kaushal Silva and Dimuth Karunaratne had a slow start to their innings. Karunaratne was quick to get off the mark, with Silva playing almost a dead-bat. The first hour or so yielded very less less as comparison to the final hour in the morning session. Zimabawe bowlers toiled hard to get wickets but were left empty handed until lunch. Sri Lanka were well placed at 91 for 0 with Karunaratne not-out on 42* and Silva not-out on 49* . LIVE CRICKET SCORECARD: Zimbabwe vs Sri Lanka, 1st Test at Harare

Silva who was very slow to start went into fifth gear in the final half and hour of the first session. Silva in his 90 ball stay has managed to his eight magnificent boundaries in his score of 49*. Karunaratne on the other hand, has relied more on singles and doubles. Karunaratne in his score of 42 has six boundaries to his name. Zimbabwe bowlers Chris Mpofu and Donald Tripano exact early swing from the pitch but were unable to pick any wickets. Debutant Mumba was good with the ball initially getting to ball to move both ways. Skipper Greame Cremer was equally ineffective in his 4 overs.

For Zimbabwe fast bowler Carl Mumba was handed the 100th cap for their country in Test, which is also their 100th Test. Mumba was consistently performing well for Zimbabwe A side, looked almost ready to be thrust into the middle against Sri Lanka. Sri Lanka had won the toss and new stand-in skipper Rangana Herath chose to bat first on a flat looking deck. Sri Lanka also had a few debutants in their side with in teenage fast bowler Lahiru Kumara and all-rounder Asela Gunaratne.

Sri Lanka have been forced to leave out as many as five-first team members from their side due to injuries which include Dinesh Chandimal, Angelo Mathews and Dhamika Prasad. With this Herath also become the oldest captain to lead Sri Lanka at the age of 38. Herath is also the oldest skipper to lead a Test side in international cricket. 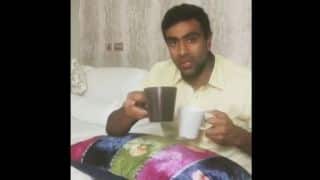 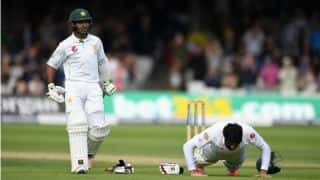