Upul Tharanga closed in on a second Test century as he became the latest Sri Lankan batsman to make the most of Zimbabwe's dropped catches in the first Test.

Upul Tharanga closed in on a second Test century as he became the latest Sri Lankan batsman to make the most of Zimbabwe’s dropped catches in the first Test at Harare Sports Club on Sunday. Kusal Perera cashed in on two dropped catches to score his maiden Test century on the opening day of the match, and day two saw Tharanga put down on 66 by Tino Mawoyo. The left-hander moved to 96 not out by the tea interval, as Sri Lanka reached a formidable 512 for eight. Tharanga’s reprieve took the number of dropped catches in the innings to seven, while Sri Lanka also benefited from three questionable decisions in which umpires Simon Fry and Ian Gould turned down appeals for lbw that replays suggested should have been given out. LIVE CRICKET SCORECARD: Zimbabwe vs Sri Lanka, 1st Test at Harare

With the Decision Review System not in use, Zimbabwe were unable to request a review. While Perera’s century on the opening day was full of attacking intent, Tharanga was his usual patient self as he played his first Test innings in more than a year. The 31-year-old began the day on 13 with Sri Lanka resuming on 317 for four, and moved to 51 on a slow morning when he lost overnight partner Dhananjaya de Silva, who became legspinner Graeme Cremer’s fourth wicket. Allrounder Asela Gunaratne marked his Test debut by scoring 54 in a 99-run stand for the sixth wicket with Tharanga, before two wickets late in the second session gave Zimbabwe hope of finally wrapping up the Sri Lankan innings. 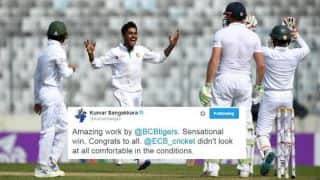