Sri Lanka have laid the foundation of a series victory at the end of Day Three and will look to clinch the series at the earliest.

Sri Lanka will be looking to carry on with the same style of play that they displayed at Day Three on Day Four. They have a golden chance to clinch the series here as they have a huge lead of 334 runs in their hand. They may have lost four wickets early in the second innings, but still, have the big lead which seems like would do them sufficient to win this match and also the series. Their batting has been a little poor side as compared to what they had shown in the first innings, but with a back up such a strong bowling attack, they will be optimistic about winning the game in a comprehensive manner. . Full Cricket Scorecard: Zimbabwe vs Sri Lanka 2nd Test at Harare

Zimbabwe have had not been consistent with their performance in this series. They displayed some good batting on the first session of the first day and also in the last session of the Day Two. But again they lost the track on Day Three but ended the day with a bang by claiming four wickets. This is how the Zimbabweans have been in this series so far, they have shown glimpses of good cricket for a while but haven t been able to be consistent and that is why they may be on the verge of losing the Test series. READ: Zimbabwe vs Sri Lanka, 2nd Test: Rangana Herath joins Muttiah Muralitharan, Dale Steyn

The day started with a lot of optimism for the hosts as they were expected to carry on with the same momentum that they had displayed in the last session of Day Two when Brian Chari and Craig Ervine went on to put a 109 runs stand for the third wicket. Both these batsmen came at the crease at the score of 60 each. But just in the days play. Ervine was removed Suranga Lakmal which kind off initiated the fall of the Zimbabwean innings. Sean Williams did play a handful knock of 58 after Ervine s wicket. But this knock wasn t enough for the hosts as Chari too departed quickly at the individual score of 80. Peter Moor tried to save the innings but all in vain as he too was dismissed at the score of 33.

After this, the hosts kept on losing wickets and eventually were bundled out for 272 thanks to skipper Herath s five-for which also has its own importance as he became the third Test player to take five-for against all Test playing nations after countryman Muttiah Muralitharan and South Africa s Dale Steyn. This meant that the visitors had a chance to enforce the follow-on on the hosts but Sri Lanka decided to carry on with batting in the second innings. As their openers came out to bat, they had a lead of 232 and it was very well expected that they would bat on and extend the lead till 500 + total and then try bowling the hosts out just as they did in the first innings. 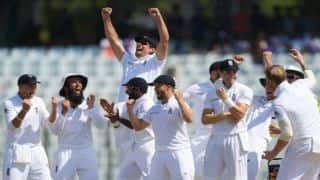