Captain Rangana Herath picked up his third and fourth wickets as Sri Lanka chipped away at the Zimbabwean batting lineup on the third morning of the second Test at Harare Sports Club on Tuesday. After Suranga Lakmal had grabbed the wicket of overnight batsman Craig Ervine in the eighth over of the day, Herath bowled opener Brian Chari for a career-best 80 and then had Malcolm Waller caught at cover for 18 on the stroke of lunch. Those dismissals left Zimbabwe struggling on 210 for five in reply to Sri Lanka s 504 all out, with Sean Williams doing his best to resist the tourists on 40 not out. Herath had picked up both of the wickets to fall on the second evening, dismissing Tino Mawoyo and Hamilton Masakadza as Zimbabwe slumped to 17 for two. Full Cricket Scorecard: Zimbabwe vs Sri Lanka 2nd Test at Harare

However Chari and Ervine took Zimbabwe to stumps on a sturdy 126 for two, and made a patient start to the third morning before Lakmal got one to move off the seam and catch the edge of Ervine s bat, removing the left-hander for 64. Chari batted on and had a maiden Test hundred in his sights when he played around a quicker ball from Herath. Although Waller made a positive start to his knock, with lunch in sight he pushed at a Herath delivery and found Kaushal Silva in the covers, leaving Zimbabwe trailing by 294 runs with just five wickets in hand and giving Herath figures of 4 for 69.

Earlier, Sri Lanka coach Graham Ford also said, We would have liked to have a few more wickets down but hopefully we can grab a few early on tomorrow. We ve seen Rangana turn some deliveries this evening, so once he gets a few going he becomes more of a factor. 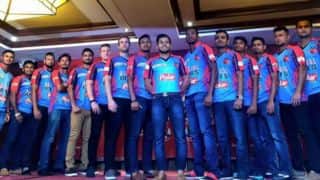