Bulawayo: Zimbabwe‘s one-day international clash with Sri Lanka was abandoned on Monday after heavy rain at Bulawayo’s Queens Sports Club left the outfield too sodden to continue. The hosts had won the toss and elected to bat first, before progressing to 55 for two in 13.3 overs when the threat of lightning forced the players to leave the field. A heavy thunder shower followed, and although the afternoon saw the sun return, one section of the ground was deemed unsafe for play to continue. With the two sides splitting the points, Zimbabwe remained bottom of the triangular series table with four points, while Sri Lanka and West Indies each have seven. FULL CRICKET SCORECARD: Zimbabwe vs Sri Lanka, Zimbabwe Tri-nation series, 4th ODI at Bulawayo

The West Indies and Sri Lanka face off at the same venue on Wednesday with the victor now assured of reaching Sunday s final. The last game of the league phase will see Zimbabwe play the West Indies on Friday. The first time these two teams met was in the series opener wherein the Upul Tharanga lead side won quite one-handedly against the minnow hosts. Sri Lanka won the toss and asked the hosts to bat first and eventually restricted them to a small total of 152. Sri Lanka chased down the total in a quick manner and earned themselves a bonus point to start their series on a positive note.

Zimbabwe, on the other hand, pulled off a magical draw in their second One-Day International (ODI) of the series against West Indies. In what was also the 200th ODI for Zimbabwe their pacer Donald Tiripano (2 for 26) gave away only three when West Indies required four to clinch their second victory of the campaign. 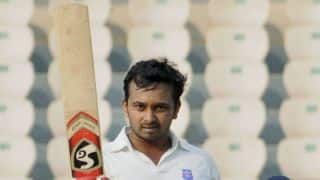