Zimbabwe in the earlier match had scored 290 batting first, whereas today they could only manage 198.

Zimbabwe lost the match by five wickets against Sri Lanka. After defeating Sri Lanka in the first match Zimbabwe failed to post a competitive total. Zimbabwe in the earlier match had scored 290 batting first, whereas today they could only manage 198. Graeme Cremer believes that they were 30 runs short as they lost many wickets in the middle order.

We just lost too many wickets

“I thought obviously we were 30 runs short with the bat. The wicket played a lot different to the last game. I thought we adjusted well when Brendon [Taylor] was in. We thought it was 230 that was par instead of 270. We just lost too many wickets in the middle overs, It didn’t help when Raza got out. I thought it was a crucial point in the game. If we got 230, we would have a really good chance of winning,” Cremer said.

Sri Lanka chased the total under 45 overs to register their first win in 2018 and second in last 17 games. Kusal Perera was the top scorer for Lanka, missing his half century by one run.

“With the wicket being a little bit two-paced, I think they saw that quite early. They used it to their advantage. I think in the evening, there was a little bit of dew,” he said.

“It came on to the bat better, not like in the afternoon when it got stuck. We will keep that in mind when we bowl first in the next game,” he added.

Brendan Taylor was the top scorer for Zimbabwe with 58 runs. However he did not come keep wickets in the second innings due to back issues. Substitute Ryan Murray kept wickets for the rest of the match.

“He[Taylor] is having problems with his back. I think it is a pinched nerve. I don’t think it is affecting his batting. It is just the crouching when keeping. He has had it for about a month. He will be okay for the next match but we always have Peter Moor who can keep,” he said.

Zimbabwe and Sri Lanka have both won a game each. Zimbabwe have the benefit of better run rate. However both team will fight for the final spot and look to defeat the host in their next match.

“It makes things interesting now. One of us has to beat Bangladesh to get into the final. It is quite nice for the viewers. I just hope it is us, come final day,” Cremer concluded. 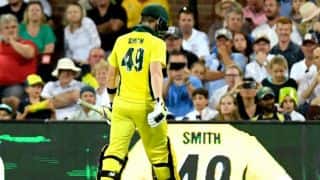 Namibia vs Zimbabwe, Canada vs Papua New Guinea, ICC U-19 World Cup 2018: Watch NAM vs ZIM and other matches Live Streaming on Hotstar