Sri Lanka ended Day 1 at 314 for seven at Harare Sports Club in Harare against Zimbabwe on Saturday with Kusal Perera securing his maiden century.

Sri Lanka, who dominated Day 1 against Zimbabwe in first Test, will want to continue their dream run on Day 2 at Harare Sports Club in Harare on Sunday. Catch the live cricket streaming of the match on tensports.com, while the live telecast of the match is available on Ten 2. The live streaming will take forward the series between minnows, Zimbabwe, and Sri Lanka who showed immense character in fighting out with Australia at home in July-August 2016. Kusal Perera struck his maiden century against as he took the centre stage on Day 1 against Zimbabwe and saved Sri Lanka from a precarious condition. FULL CRICKET SCORECARD: Zimbabwe vs Sri Lanka, 1st Test at Harare

Perera was dropped twice in this match and that cost Zimbabwe as he played knock of 110. Kaushal Silva was the next man who kept Sri Lanka in the hunt for more runs as he put up 94 on board. Sri Lanka ended their day at 319 for 4 after winning the toss and electing to bat against the hosts. Zimbabwe played their 100th Test match and under their new coach Heath Streak but faced pretty similar problems that they faced against South Africa that was the fielding. Though, they did four wickets under their belt, nothing went right since then.

Perera was dropped on 15 and 30 while Silva was dropped on 89. There was another notable contribution from Dimuth Karunarathne, who scored yet another half-century. He was also dropped in the second over. However, they did try to bring some momentum towards the end of day as skipper Graeme Cremer was the only one who got highest wickets ending the day with figures of 3 for 82 on Day 1. Zimbabwe have a long way to go on Day 2 as Sri Lanka do have depth in their batting department despite missing out on their key players like Dinesh Chandimal, Angelo Mathews, Nuwan Pradeep and likes.

There is the captain Rangana Herath who is to make an entry lower down the order and can also produce some runs. He has bundled out Australia cheaply earlier and if Zimbabwe bat tomorrow, they will have to face the experienced spin maestro. 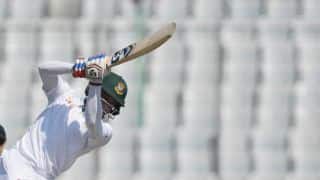