The live cricket streaming of Zimbabwe vs Sri Lanka, 1st Test, Day 3 is available on tensports.com, and OZEE mobile app.

Hosts Zimbabwe face off against visitors Sri Lanka on Day 3 of the first of the two-Test series at the Harare Sports Club on Tuesday, as the live cricket streaming of the match is available on tensports.com, and OZEE mobile app, while the live telecast is available on Ten 2 and Ten 1 HD. Zimbabwe are currently trailing by 378 runs in the opening innings, after the Sri Lankan batsmen took total control of their opening innings, as they were shot out for a mammoth total of 504, while Zimbabwe have so far managed to score 126 for the loss of a couple of wickets until stumps on Day 2. Full Cricket Scorecard: Zimbabwe vs Sri Lanka 2nd Test at Harare

Zimbabwe have ended the Day Two on a very satisfying note as they saw a Brian Chari and Craig Ervine provide an unbeaten stand of 109 runs for the third wicket. They need to carry on in the same manner as they have displayed some gritty batting quality which they have displayed in the final session of Day Two. They were a little shaky in the start against the wily spin of Rangana Herath as he was on fire after scalping two wickets in a matter of three balls. But they batted out these tough overs with sheer sincerity and were rewarded soon.

Chari was being very calm at one end while Ervine was blasting off the bad as well as the good deliveries. The visitors, on the other hand, looked pale and clueless towards the closing stage of the game. They got in various bowling changes but none of them worked as both batsmen had settled in quite well. 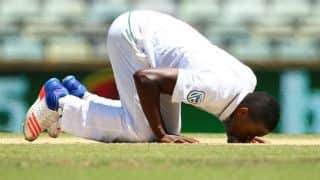