Last time Zimbabwe and Sri Lanka locked hons in the series, the game was abandoned.

We are into the last match of the Tri-Nation series between Zimbabwe, West Indies and Sri Lanka. Zimbabwe and West Indies played out a virtual eliminator which decided the finalists of the series as hosts take on Sri Lanka in the seventh One-Day International (ODI) at Queens Sports Club, Bulawayo. The live cricket streaming of the match is available on tensports.com, while the live telecast of the match is available on Ten 1 HD and Ten 3. Sri Lanka reached the finals before only and will fancy their chances ahead of the hosts. Nonetheless, the hosts have improved with every game and will try to spring a surprise as well. Full Cricket Scorecard, Zimbabwe vs Sri Lanka, 7th ODI, Bulawayo

These two teams started the series and will fold it as well when the final encounter takes place on November 27. In both the clashes, Sri Lanka were on top winning the first game by 8 wickets. Batting first, Zimbabwe collapsed to just 154 as Sri Lanka chased down the target with plenty overs in hand. In their last tie, Zimbabwe looked on verge of another surrender before rain interrupted play. Zimbabwe were 55 for 2 in 13.3 overs before rain played spoilsport to give both sides two points each.

The hosts will have to lift up their batting standards in the final match if they have to pose a threat to Sri Lanka. Sri Lanka defended over 300 against West Indies by 1 run and have ticked all boxes against the minnows as well. They will be favourites but should not get complacent for one last encounter. 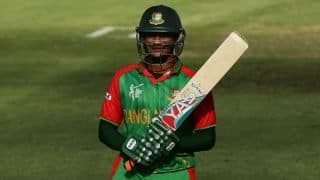