West Indies looked in control of the match when they reached 219 for 4 in response to Zimbabwe s 326 all out, only for Sikandar Raza to grab three wickets in 4 overs and reduce them to 230 for seven.

Zimbabwe off-spinner Sikandar Raza claimed his maiden five-wicket haul before West Indies launched a vital counter-attack as the two sides traded blows on the third afternoon of the second Test on Tuesday. West Indies looked in control of the match when they reached 219 for 4 in response to Zimbabwe s 326 all out, only for Sikandar Raza to grab three wickets in 4 overs and reduce them to 230 for seven.

However, a bold partnership of 58 between wicketkeeper Shane Dowrich and captain Jason Holder reduced the deficit as they carried the West Indies to tea on 288 for seven. With figures of 5 for 61, Sikandar Raza became the first Zimbabwean spinner to take a five-wicket haul at Queens Sports Club since Ray Price achieved the feat against the same opponents in 2003.

Having contributed 80 in Zimbabwe s first innings, he was also the fifth Zimbabwean to score a fifty and take five wickets in a Test. While the second evening had produced attritional cricket as the West Indians crawled to stumps on 78 for one, the tourists were more adventurous on day three with opener Kieran Powell leading the way in a 55-run stand for the second wicket with nightwatchman Devendra Bishoo.

It took the introduction of Sikandar Raza to change the course of the morning, as he had Bishoo caught and bowled for 23 and then trapped Kyle Hope lbw for one.

Powell looked destined for a fourth Test century after he was dropped on 85 by Graeme Cremer, but seamer Chris Mpofu ensured the mistake was not costly as he used the second new ball to have the opener caught at gully for 90.

An attacking 56-run stand for the fifth wicket between Shai Hope and Roston Chase put the West Indies back on top after lunch, before Sikandar Raza intervened once again.

After Chase was trapped lbw for 32 by the offspinner, Hope was bowled for 40 and Jermaine Blackwood became Sikandar Raza s fifth victim.

With a deficit of 96 and just three wickets in hand the West Indies looked set to concede a large first-innings lead on a difficult pitch, but Dowrich s unbeaten 36 and Holder s 25 not out gave them a sense of parity at tea. 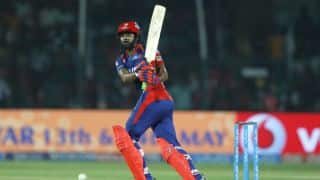 India vs New Zealand 2017-18: Shreyas Iyer backs himself to bat at any position in T20Is