Zimbabwe reached 218 for 8 against West Indies in a rain-affected encounter at the Queens Sports Club, Bulawayo. In what is considered the semi-final of the Zimbabwe tri-nation series, West Indies came out strong against the hosts after the rain interrupted the play for 40 minutes. After opting to bat first, Zimbabwe had a decent start. Sikandar Raza played a crucial innings of 76 from 103 deliveries. In addition, No. 9 batsman Tendai Chisoro scored 42 off 35 balls to take Zimbabwe past 200. And for West Indies, Ashley Nurse took 3 wickets for 27 runs.

It was after the brief interruption of rain that the game was reduced to 49 overs. Zimbabwe had already lost their opener Chamu Chibhabha, who played a lazy shot and gave away his wicket. Meanwhile, Jason Holder employed spin from both ends with Devendra Bishoo and Ashley Nurse. First, Bishoo dismissed Hamilton Masakadza. Then, in the very next over, Nurse got the better of Craig Ervine and Sean Williams within a matter of three balls.

Both Bishoo and Nurse, then, made matters worse for Zimbabwe, removing Peter Moor and Graeme Cremer respectively to make 3 wickets each for both the West Indian spinners.

However, it was the responsible batting from Raza that put Zimbabwe in a safe position. When Raza walked in to bat, it seemed the hosts will be bowled out for a paltry 120-130. But Raza stitched up an important partnership of 38 runs for the eight wicket with Donald Tiripano. Later, Tiripano was dismissed by Jason Holder, which brought in Chisoro to the crease

Chisoro then batted with maturity and scored 42 off 35 balls, laced with two fours and as many sixes to help his team get out of a tight spot. All the same, Chisoro then shifted his batting gears aggressively, easing the pressure off Raza. The duo went onto put up a partnership of 92 off 74.

The West Indian pacers were completely out of sorts after the rain break. Spinners, however, did a decent job. Had the pacers put up a good show, Zimbabwe would have been restricted to a cheap score. But credit must be given to the way Raza constructed his innings with the tail-enders to take his side to a challenging total in what is the crucial match of this tri-nation series. 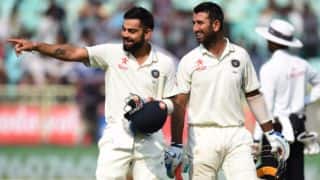