Zimbabwe hold a position of power against West Indies in first of the two-Test series. The opening day of the first Test at Queens Sports Club in Bulawayo saw the visitors suffer a horrible collapse. The live streaming of the first Test will be available in India on Sony LIV. The live telecast will be shown on Sony Six HD. For all the live scores and ball-by-ball commentary, you can follow CricketCountry s LIVE SCORECARD.

For the tourists only Shai Hope and Kieran Powell showed some resistance. Roston Chase got a start but couldn’t convert it into a big innings. West Indies were bundled out for 219 runs with Shai making 90 not out and Kieran scoring 56.

It was Greame Cremer s wily spin that did the trick, picking up a 4-for. He was well supported by Sean Williams who scalped 3 wickets.

In reply, Solomon Mire came out all guns blazing while Hamilton Masakadza was watchful. Nothing significant was seen from the West Indies bowlers in the five overs they bowled. Zimbabwe are currently 200 runs away from taking first-innings lead. 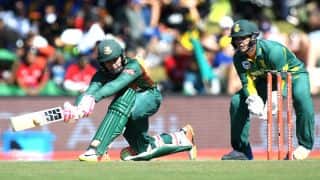