Live streaming of the first Test will be available in India on Sony LIV.

Zimbabwe have to brace themselves for the highest chase in Test history after West Indies built a 429-run lead on Day Three of the first Test in Bulawayo. At close, West Indies were 369 for 8 with Kraigg Brathwaite and Roston Chase bolstered their innings further. Although he lost Brathwaite, Chase remained unbeaten 9 short of his fourth Test century. The live streaming of the first Test will be available in India on Sony LIV. The live telecast will be shown on Sony Six HD. For all the live scores and ball-by-ball commentary, follow our live scorecard here.

It was a frustrating day for Zimbabwe, who had done so well in restricting the West Indies to a first-innings total of 219 on the opening day of this match. They reached 91 for 1 before tumbling to 159. They needed another outstanding performance with ball, which never materialised. West Indies successful pursuit of 418 to beat Australia in May 2003 ranks as the highest run-chase in Test cricket history. Can Zimbabwe secure a new record? 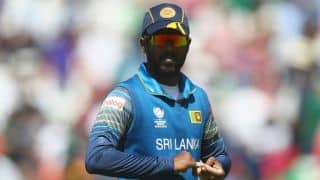