Baku: Indian boxers Manoj Kumar (64kg) and Vikas Krishan Yadav (75kg) registered comfortable victories in the quarter-finals of their respective weight categories to qualify for the upcoming Rio Olympics at the World Olympic Qualifiers here on Thursday. The duo thus joined Shiva Thapa (56kg) in the Indian boxing contingent for the Rio Olympics. Thapa had booked his Olympic berth at the Asia and Oceania qualifiers earlier this year. Manoj thrashed Rakhimov Shavkatdzhon of Tajikistan 3-0. He will face Pat McCormack of Britain in the semi-finals on Friday. McCormack, the reigning European champion, defeated Amzile Hassan of France in the last eight stage.

Later in the day, Vikas became the third Indian boxer to secure an Olympic quota by winning his middleweight (75kg) quarter-final bout against South Korea’s Lee Dongyun. The Indian pugilist was in terrific form, taking the attack to this South Korean opponent right from the opening bell. The dominance of the 24-year-old was constant over the three rounds, comfortably winning all three to enter the semi-finals in style.  In the earlier rounds, the second seeded Vikas had opened his campaign with a gruelling victory against Japan’s Takahashi Makoto in the second round. A straightforward victory over Georgia’s Zaal Kvachatadze allowed the southpaw to enter the quarter-finals.

“I am extremely delighted to have secured the Olympic quota. It has been a long journey with quite a few ups and downs. I was confident in my abilities and always believed that I had what it took to reach the Olympics and put up a strong performance on that stage,” Vikas said in a statement.  “My coaching staff along with my backers JSW have always had faith in me and I am glad that I have managed to justify that when it mattered.”

Vikas said that while the bout against Makoto took a toll on him, it steeled him for what was to come.  “I wasn’t very well when I took on the Japanese but after getting that win, I knew I could clinch the quota. It was important to put everything on the line, not hold anything back but at the same time fight in an intelligent manner. I have another big bout coming up and right now, I really want to go all the way here,” he said.

Vikas is the first Indian boxer to compete in the AIBA Pro Boxing (APB) series. Having fought two bouts on the APB circuit — he lost one and won the other — he is also eligible to compete at the Olympic qualifiers for professional boxers which will be held at Vargas, Venezuela in July. 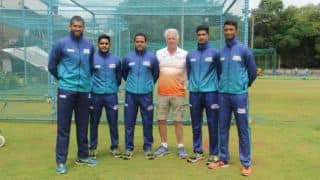