Rio de Janeiro: Street artist Thiago Furtado, better known as Valdi Valdi, created five colourful graffiti murals on walls here to express his support for Brazil’s Olympic athletes. The murals, located at different sites and titled “Burning Spirit Series,” depict five Brazilian athletes who will compete in the Summer Olympics and Paralympic Games in August and September, respectively, in a realistic style. The goal is to reflect “how the Olympic flame burns in their spirit,” Valdi Valdi told Efe. For his series, Valdi Valdi chose Olympic athletes Arthur Zanetti, who will compete in artistic gymnastics; wrestler Joice Silva and Fabiana Murer, who will compete in the pole vault; as well as Paralympic athletes Fernando Fernandes, who will participate in the paracanoe competition, and runner Alan Fonteles.

The artist said he chose spaces of roughly 20 sq. meters (215 sq. feet), using bright colours ranging from cyan to orange to represent the athletes in moments of concentration, conveying “the strength and dedication of each one of them.” Valdi Valdi said he researched each of the athletes to find them “at a decisive moment” and did a number of montages to depict them “in the most dramatic position possible.”

Once he finished the sketches, Valdi Valdi worked an average of two and a half days to complete each graffiti mural on the previously selected walls. The artist said he worked on short deadlines, adding to the challenge of toiling in “very hot conditions” during the Rio summer. The effort was rewarding, with Valdi Valdi receiving messages from the athletes, who were surprised to see their faces on Rio walls. Furtado, a street artist born in the southern city of Florianopolis, has achieved national recognition since he started showing his work in 2006. 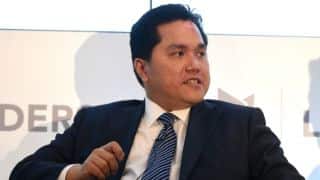