Kynan Chenai gave himself an advance birthday gift by securing a quota place for the Rio Olympics.

New Delhi: Kynan Chenai gave himself an advance birthday gift by securing a quota place for the Rio Olympics but London Games silver medallist Vijay Kumar’s hopes of earning a berth went up in smoke at the Asia Olympic Qualifying Competition for shooting on Thursday. The 26-year-old Kynan registered the best day of his short career when he battled all odds to finish fourth and grab one of the four quotas available in men’s trap event on day two of the event at the Dr. Karni Singh Shooting Ranges. Kynan’s birthday is on Friday. He qualified for the strong six-man finals field shooting a score of 120 (47/50 on Wednesday and 73/75 on Thursday).

In the final rounds, Kynan tied with three others after the first 15 shots with a score of 12 to reach the semi-finals stage, thereby assuring the 10th quota for India from shooting. In the bronze medal shoot-off with Kuwait s Talal Al-Rashidi, competing as an International Shooting Participant (IPS) since his country is under IOC suspension for government interference, Kynan missed two of his 15 shots to his opponent’s one.

Another International shooting Participant Abdulrahman Al Faihan won the gold medal in the trap event and Chinese Taipei s Yang Kun-Pi bagged the silver. The other three quotas in the event went to Kuwait, Chinese Taipei and Kazakhstan respectively. In the men’s 25m rapid fire pistol event, Vijay saw his dreams of securing a quota for Rio fade away after having qualified for the finals with a top score of 576 in qualifying.

In the six-man final where he had to beat Qatari Oleg Engachev and one out of two Japanese shooters to ensure a quota, Vijay became the second shooter to be eliminated finishing fifth as a result. The two quotas in the event were bagged by gold medallist Teruyoshi Akiyama and bronze winner Eita Mori of Japan. Korea’s Yong Hoo Choi clinched the silver. Korea could not claim quotas in this event as they had already exhausted their share in earlier competitions.

However, Manavjit Singh Sandhu could not clear the qualification hurdle in men s trap and the former world and six-time Asian champion will now have to put up a better performance in the selection trials starting on February 6. Kynan was delighted with the result, though he could not finish on the podium. “This is the biggest achievement of my shooting career. Now, winning a medal in Olympics will depend on my training and work on my physical and mental aspects,” Kynan said after the event.

Kynan gave credit to his senior Manavjit for helping him out with useful tips and acknowledged the efforts of his mother and father. Kynan’s father Darius Chenai had last month won the gold medal in the SAME event at the Shooting Nationals. Asked if he was under pressure, Kynan said, “I just have to shut out pressure as much as I can. It can t be shut out completely. Dad told me to just believe in my ability and be relaxed. It is more difficult to shoot at home.”

Kynan is sponsored by Italian firearms manufacturing company Beretta and supported by non-profit organisation Olympic Gold Quest (OGQ). Another Indian participant in men s trap, Prithviraj Tondaiman also failed to make the final cut. “It was hard luck and I shot 1 hit in one of the final rounds, and that did not help my cause. My preparation was on the right track and I was having no problem with my shoulder and neck. They are fine. It happens in sport, it was not my day,” Vijay, who made the country proud by winning a silver medal in his pet event, said.

He added, “I have made a lot of finals in my international as well as domestic career, and I have done well in them. I am looking forward to 2020 (Tokyo Olympics). I can only say that I gave my best.” He had a word of advice for compatriot Gurpreet Singh, who has already secured a quota and is likely to represent India in the same event at Rio. “He should just focus on his shooting. I wish him good luck. It s great for all of us that he has secured an Olympic quota.”

Vijay was disappointed with the result, but looked ahead to the future with hopes. Kynan’s was India s second quota from the competition after Heena Sidhu won gold on day one in the women s 10m air pistol. Omkar Singh, in the men s 50m pistol, is one of India s quota hopes on day three on Friday. All three women in the 10m air rifle event on day three – Pooja Ghatkar, Ayonika Paul and Elizabeth Susan Koshy – would be also looking to earn quotas. 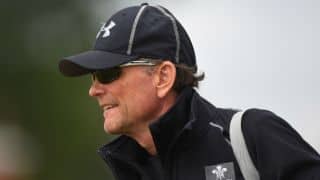