Ravinder Khatri and Babita Kumari booked their spots for the upcoming Rio Olympics, slated to be held from August 5 to 21.

New Delhi: The total number of quota places for India, emerging as a global power in wrestling, has swelled to eight after Ravinder Khatri and Babita Kumari booked their spots for the upcoming Rio Olympics, slated to be held from August 5 to 21. Both Ravinder and Babita confirmed their ticket to Rio after their rivals failed a dope test. Khatri was awarded the berth in the Greco-Roman 85kg after Kenzheev Zhanarbek of Kyrgyzstan tested positive at the Asian Olympic qualifier while Babita booked the berth after Mongolian wrestler Sumiya Erdenechimeg failed the dope test in 53kg freestyle at the same event.

Last week, Vinesh Phogat and Sakshi Malik secured Rio berths in 48kg and 58kg, respectively, at the second World Olympic Qualifying tournament in a historic feat of two Indian women wrestlers qualifying for Olympics for the first time. While Vinesh won a gold in 48kg category, Sakshi bagged a silver in 58kg class as they booked a Rio Games quota place each for the country.

This is the first time three women wrestlers from India have qualified for the Olympics. Geeta Phogat was India’s lone female wrestler competing at the London Games four year ago. The Rio Games will also be the first time that India will be represented in all three formats — men’s freestyle, female wrestling and Greco-Roman. 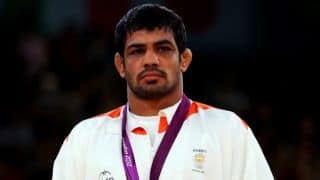 Nicolai Adam: Focus is on mental fitness of India U-16 team