Russian athletes are unlikely to compete at the Olympic Games in Rio de Janeiro after the International Association of Athletics Federations (IAAF).

Moscow: Russian athletes are unlikely to compete at the Olympic Games in Rio de Janeiro after the International Association of Athletics Federations (IAAF) on Friday upheld the ban on the Russian track and field team. “The IAAF meeting and vote have taken place and our membership in the IAAF was not restored,” President of the All-Russia Athletic Federation, Dmitry Shlyakhtin confirmed to RT by phone. “The athletes with clean records who have never used banned drugs will be making their own decisions now,” he said. “Clean athletes still have chances to go [to the Olympics] if they take their cases to court.”

Many Russian athletes who have not tested positive for a banned substance were expected to take their cases to the Court of Arbitration for Sport. Two-time Olympic pole-vault champion Yelena Isinbayeva earlier indicated that she would take action if prevented from competing. The decision on Russia’s suspension is to be officially announced at an IAAF meeting in Vienna later.

While the ruling appears final, the main hope of competing in Rio for Russian athletes who have not been found guilty of doping lies with the International Olympic Committee (IOC), which meets with other sports bodies next Tuesday in Lausanne, Switzerland. Russia’s Sports Ministry has already released a statement expressing its disappointment with the IAAF’s decision.

Russia’s Sports Ministry has urged the International Olympic Committee to assess the consequences of banning Russia’s national team from the 2016 Olympic Games. “The Ministry is calling upon all members of the International Olympic Committee to once again assess the consequences the precedent [ban of the national team from the Olympic Games] will have both for Russian athletes and all of Russian people as well as for other memebrs of the Olympic movement,” an official statement says.

“The decision to ban the All-Russia Athletic Federation was an expected one, we predicted that,” Russia’s Sports Minister Vitaly Mutko said. “We will respond,” he added. The World Anti-Doping Agency (WADA) first made allegations against Russia in November 2015, accusing the country’s athletics and anti-doping bodies of massively breaching anti-doping rules. The IAAF suspended Russia in November over the accusations.

The head of the Russian Olympic Committee, Aleksandr Zhukov, had said on Wednesday that the All-Russia Athletic Federation (ARAF) was ready to become a member again as it has met over 40 conditions set forth by the IAAF to be accepted back. 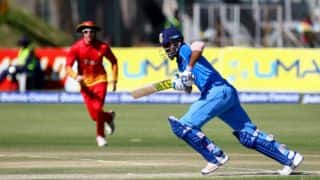 India vs Zimbabwe 2016, 1st T20 at Harare: KL Rahul vs Donald Tiripano and other key battles